Route 50: Through the most beautiful surroundings of the Radziejowa Range

At the foot of the Beskid Sądecki there is a beautiful health resort – Szczawnica. It is worth taking a walk among the wooden historic buildings and see the neo-Gothic church. The proposed trip leads through the most beautiful surroundings of the Radziejowa Range, partly located 1000 m a.s.l., which require good shape and a functional mountain bike. We start the ride in the centre of Szczawnica, next to the bottom station of the lift to Palenica. We set off along the main road (Szalaya Street) to the east and, before reaching the bridge, we turn into a side street (Samorody) and continue along Grajcarek to Sopotnicka Street. We follow the bicycle routes, turn left and start the gentle uphill ride in the Sopotnicki Stream valley. We pass the Zaskalnik Waterfall, then a resort with an inn and the turnout with the blue trail going to the right. A little further on, at the next turnout by the forest chapel, we cycle to the right. We start the long, arduous uphill ride along the black bike trail to Przechyba (watch out for the turnout of the trail near the hill No 968). After a moment of rest in the hostel, we turn right along the red trail towards Radziejowa. We pass the highest point of the route – Złomisty Wierch (1224 m) and get through the Długa Pass, where the steep climb begins, we then turn slightly to the right (after the ski trail signs) to bypass the Radziejowa peak. We return to the red trail at the Żłobki Pass, but after 600 m we leave it at the Obrazek pass after the Wielki Rogacz Hill. We turn right onto the blue trail and go down to the Obidza Pass. Here, following the red trails, we turn sharply right. We go down the wavy ridge and get to Biała Woda Valley along a steep descent. On the left we can see the Biała Woda Reserve. In the centre of Jaworki, next to the car loop, we turn right to visit the stone Orthodox church located a little higher. We pass the Homole Gorge and cycle through Szlachtowa (Pieniny Museum and a stone church) along a gentle descent, returning to Szczawnica.

1. Health resort buildings in Szczawnica – 19th-century baths, villas, guest houses and other spa buildings remembering the times of Józef Stefan Szalay, the then owner of the whole resort. The Old and New Park and wooden houses also come from this period, which in addition to numbers have also their own emblems, e.g. "Under the Falcon", "Under the Windy Mill", "Under the Wheel", "Under the Spaniard". The creation of this health resort known throughout Poland is associated with the occurrence of sorrels – healing bicarbonate waters. One of the biggest attractions of the town, created in modern times, is the chairlift to Palenica, open all year round. At the top there are ski runs and a gravitational slide intended mainly for children.
2. The church in Szczawnica – neo-Gothic temple from 1892, designed by Stanisław Eliasz Radzikowski.
3. PTTK (Polish Tourist and Sightseeing Society) hostel on Przehyba – located on the peak of the same name in the Radziejowa Range, part of Beskid Sądecki. The first hostel in this place was established in 1938. The current one was built on the ruins of the previous one, which burned down in 1991.
4. Biała Woda Reserve – a landscape reserve with an area of 33.71 ha. It protects a picturesque fragment of the stream and relict specimens of alpine plants.
5. Former Greek Catholic church in Jaworki – built in 1798 by Wallachian people living in the village. Currently a Catholic church.
6. Homole Gorge – a landscape reserve with the area of 58.64 ha in the Małe Pieniny. It includes a deep canyon carved in limestone rocks by Kamionka and Koniowski Potok. Massive rocks up to 120 m high. Numerous thermophilic rock grasslands. Rare plant species, including Carpathian snowbell, two-leafed dormouse, yew-trees.
7. Pieniny Museum in Szlachtowa – an ethnographic and historical exhibition. The ethnographic part presents the regional architecture, the historical one is devoted to Szczawnica. tel. 18 262 22 58. 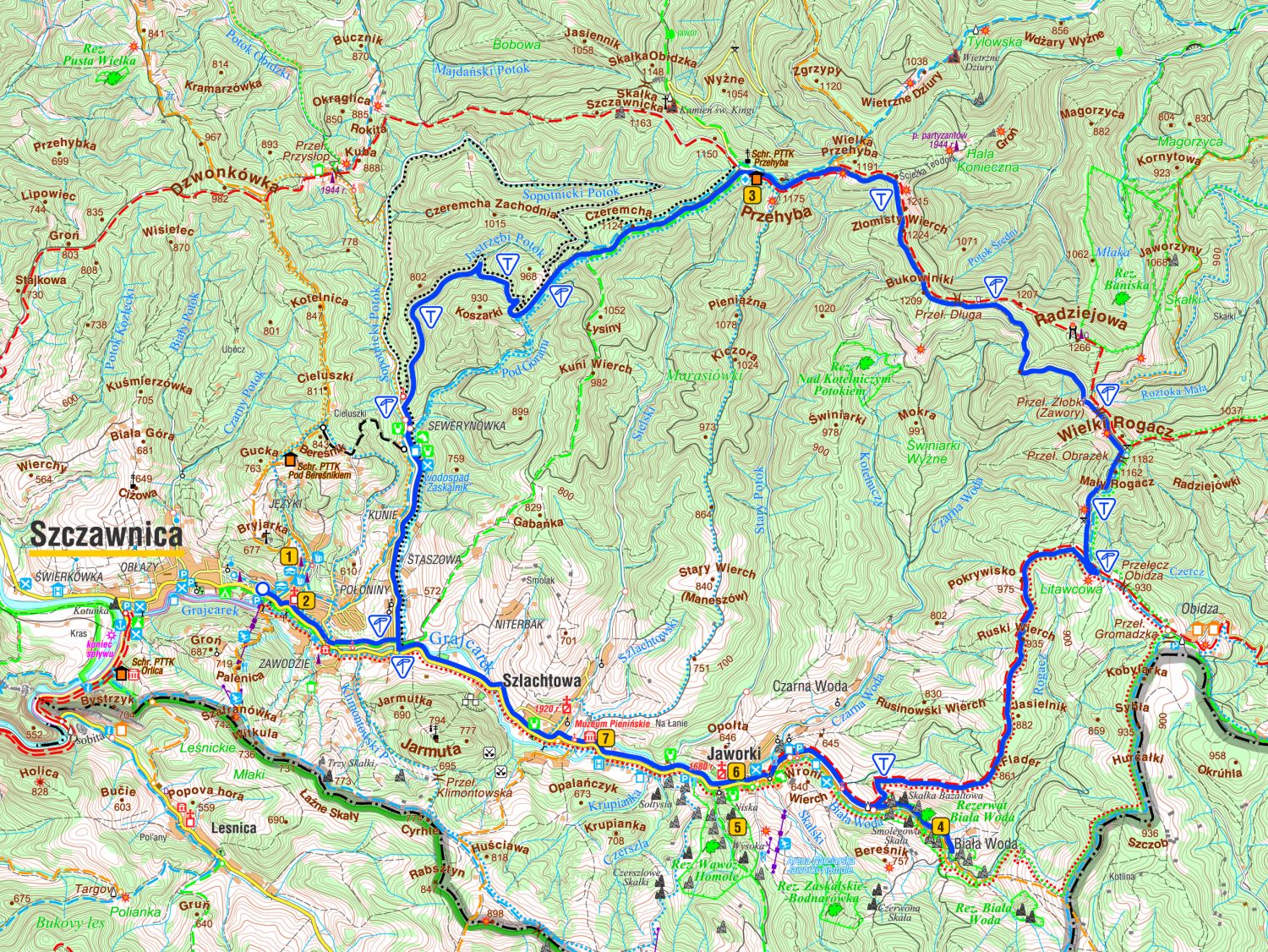