Route 18: In the shadow of Niepołomice Forest

Easy and pleasant route along the roads and paths of the Niepołomice Forest combined with visiting several interesting places in the immediate area.
The trip begins in the car park at the market square in Niepołomice. Earlier, it is worth visiting the Royal Castle next to the market square and the historic church from the 14th century, which stands on the other side. Starting at the roundabout, we head towards Bocheńska Street following the green tourist trail, then further, along the bike path along the national road, we get to the parking lot with the node of trails. We then carefully go through a pedestrian crossing and enter the Niepołomice Forest. We stay on the green trail and cycle over 6 km along the Royal Road. We turn right next to the small car park in Przyborów. We "conquer" the highest peak of the forest – Kobyla G. (212 m a.s.l.) and – leaving the green trail, which turns left – we take the road straight ahead to leave the Niepołomice Forest. The next kilometres of the route, becoming slightly mountainous, lead along open roads through small towns near Kraków (Kłaj, Targowisko, Grodkowice, Brzezie, Staniątki). In Grodkowice we will find the former Żeleński Palace, and in Brzezie a magnificent church from the beginning of the 20th century. In Staniątki we can visit the Marian sanctuary towering over the village and the Benedictine monastery. From the main road we turn into Polna Street, we cross the tracks and return to the road to Niepołomice. 800 m further we follow the blue bike trail and turn right to enter the Niepołomice Forest again. At the forest rest area and the node of bike trails we turn left, and enter the forest path to Niepołomice. Partyzantów Street will lead us back to the centre of the town.

1. The castle in Niepołomice – erected on the edge of the forest in the 14th century on the initiative of King Casimir the Great. Initially it was a small castle, which was expanded in the next two centuries to form a Renaissance residence and served the royal manor as a hunting castle and a place of reunions. Currently, the castle houses the collections of the 19th Century Polish Art Gallery of the National Museum in Kraków, which were transferred here from their previous place of exhibition, the Sukiennice (Cloth Hall) in Kraków.
2. Church in Niepołomice – built in the years 1350–58. The presbytery and the adjacent chapel with preserved Gothic architectural detail and unique frescoes from the 14th century come from this period. Noteworthy are also the two chapels: one Mannerist from 1596 (the work of Santi Gucci) and the other early Baroque, with a wonderful painting of St Charles Borromeo.
3. Niepołomice Forest – a vast forest area, located at the bifurcation of Vistula and Raba Rivers. Eagerly visited by the inhabitants of Kraków, looking for fresh air and peace. The forest was a favourite place of royal hunting in old Poland. The main part of the Forest is made up of pine forests, while the smaller, northern complex along the Vistula, is dominated with deciduous forests. The Niepołomicka Forest is part of the European Ecological Network Nature 2000.
4. The Żeleński Palace in Grodkowice – erected in 1900–1906 according to the design of Teodor Talowski. Like most of the artist's works, it has a specific architecture – referring to the Gothic and Romantic style. The property is surrounded by a historic landscape park. Currently, the palace houses a training and hotel complex, open also for cultural and artistic activities.
5. Church in Brzezie – built in 1924 with a characteristic palm vault. A classicistic mausoleum of the Żeleński family was erected next to the church in 1903.
6. The monastery complex of the Benedictine Nuns Abbey in Staniątki – founded in 1238 thanks to the foundation of Klemens Griffin. The church being part of the complex is the oldest hall church in Poland, and its shape has remained almost unchanged to modern times. It is worth paying attention to the 14th-century sculpture of Madonna in the throne. Information: www.benedyktynki.com.pl 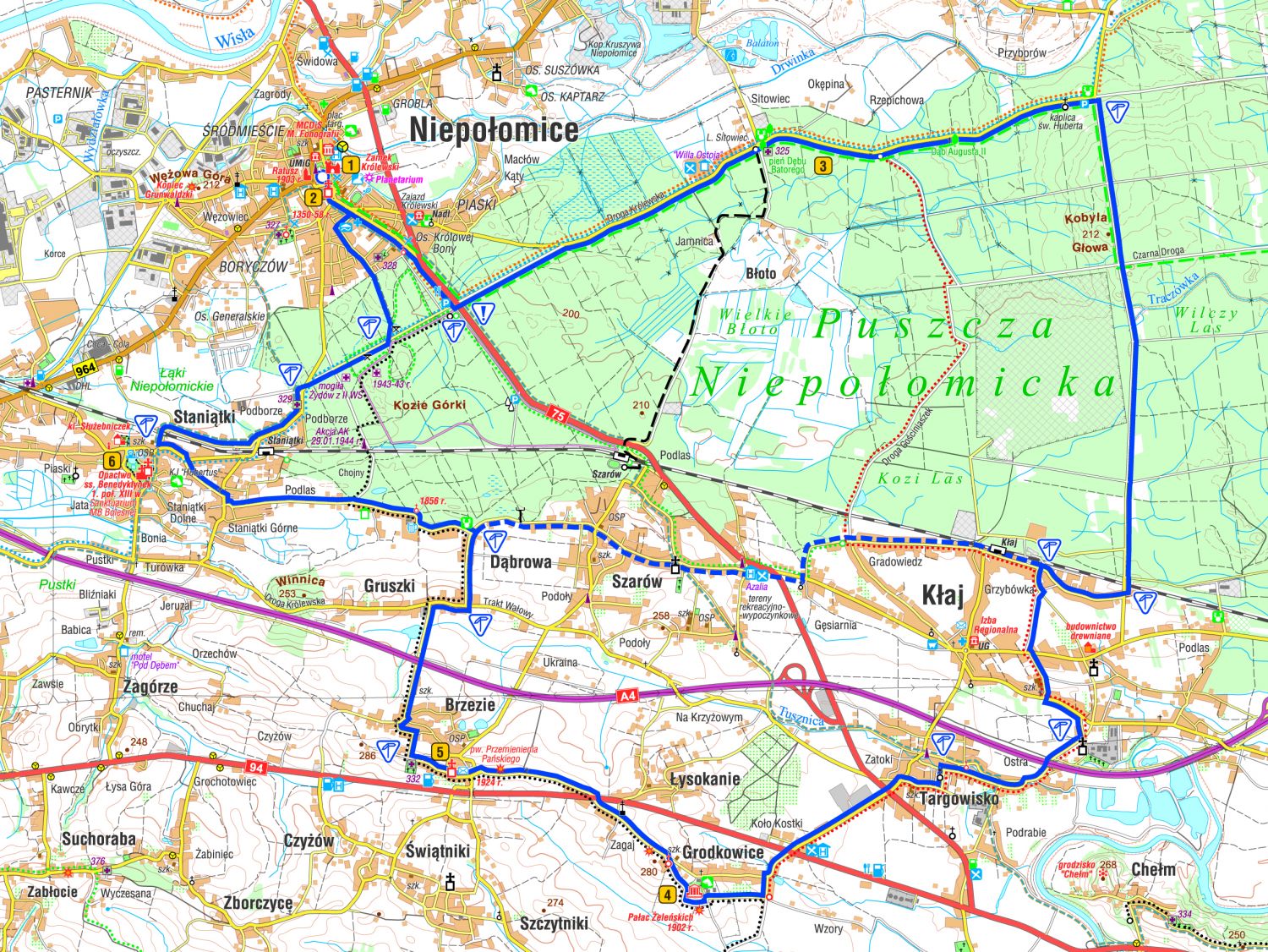