Route 7: Treasures of the Kraków-Częstochowa Upland

The majestic rocks of the Prądnik Valley and Będkowska Valley, beautiful castles in Ojców and Pieskowa Skała as well as prehistoric caves are the Jurassic attractions that we will see during this trip. We start in the Biały Kościół, at the parking lot on the edge of the Ojców National Park. We take the picturesque serpentine descending road, closed for car traffic, to reach the Prądnik Valley (Kraków Gate, Source of Love, Dark Cave). Keeping to the main road, we go to the centre of Ojców (museum, castle). We continue to move along the bottom of the valley near the Chapel on the Water and historic mills until the bifurcation. Following the road No 773, we turn left and after about 3 km we reach Hercules' Club and the castle in Pieskowa Skała. After visiting the castle, we return through the valley to the Club, and right behind it we turn right through the narrow asphalt road following the blue bike trail. We take the Sokolec Gorge to the top and turn right along the main road, abandoning the trail. We cross national road No 94, turn left after the cemetery and go down to the centre of Jerzmanowice. In front of the church, we turn left and head Łazy. After 700 m, we turn left again, and then turn right onto a dirt road following the blue bike trail. The trail leads by the Grodzisko Hill with the former border post. After that, we follow the blue trail up to the Będkowska Valley. Here we joint the red bike trail. Having chosen the shorter variant, we go left – if we plan to complete the entire route – and follow the red trail along the valley to reach Kobylany. We leave the trail and go by the main road through Karniowice (manor) to Bolechowice (Gothic church), and then, following the red trail along the long climb, we get through Gacki to Zelków. In Zelków, we abandon the trail, go right through the centre and descend to the Kluczwoda Valley, where we turn left. The black trail will lead us to the Wierzchowska Cave. Going further, we turn right at the intersection, and after reaching road No 94 we turn left then right, and return to the parking lot.

1. Ojców National Park – one of the smallest national parks in Poland. It includes the valleys of Prądnik, Sąspówka and others, as well as numerous limestone rocks and caves (including the King Łokietek Cave and the Dark Cave made available for visiting). ONP has the richest vascular plant sites in the country and bat colonies. Ojców – the seat of the Park – offers visitors Natural Museum, ruins of a stronghold from the 14th century and a beautiful wooden Chapel on the Water from 1901.
2. Castle in Ojców – a medieval castle erected in the 14th century by King Casimir the Great. Only the picturesque ruins of the defensive walls and residential parts, the huge tower and the entrance gate have been preserved to this day. The site offers a picturesque view on the Prądnik Valley. It has been made available for tourists.
3. The castle in Pieskowa Skała – a Gothic stronghold, erected in the 14th century by King Casimir the Great. After the reconstruction in the 16th century, it acquired the character of a Renaissance palace residence. Its arcaded cloisters, a two-story loggia and a garden terrace come from this period. Rebuilt many times after numerous fires and damages during the Swedish invasion. After World War II, conservation work restored Pieskowa Skała its 16th-century form. An exhibition of furniture, sculptures, paintings and handicrafts are available in the castle premises.
4. Church in Jerzmanowice – Classicistic building from the first half of the 19th century.
5. Manor in Karniowice – built in the 18th century with features of a late Baroque building, referring through the alcove to the former defensive manors. Currently a private property.
6. Church in Bolechowice – Gothic building from the end of the 14th century. Extended in the 15th century by a nave and, at the beginning of the 20th century, by a tower. Gothic polychromies in the presbytery, mostly Baroque furnishings.
7. Wierzchowska Cave – the second largest cave discovered in the Kraków-Częstochowa Upland. It is 975 m long, of which 700 m of corridors and chambers are open to tourists. The sightseeing route is diversified by paleontological and archaeological exhibitions. 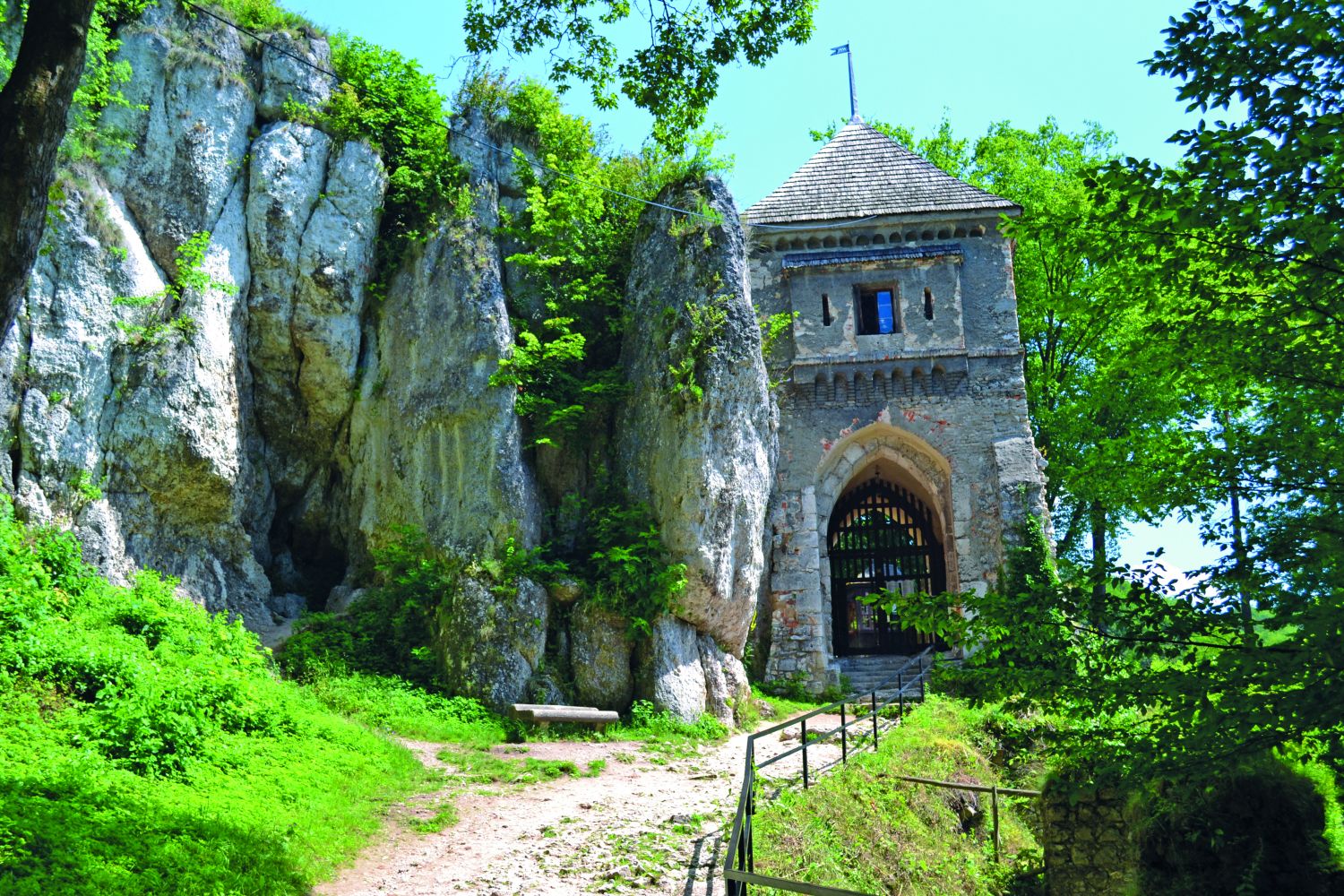 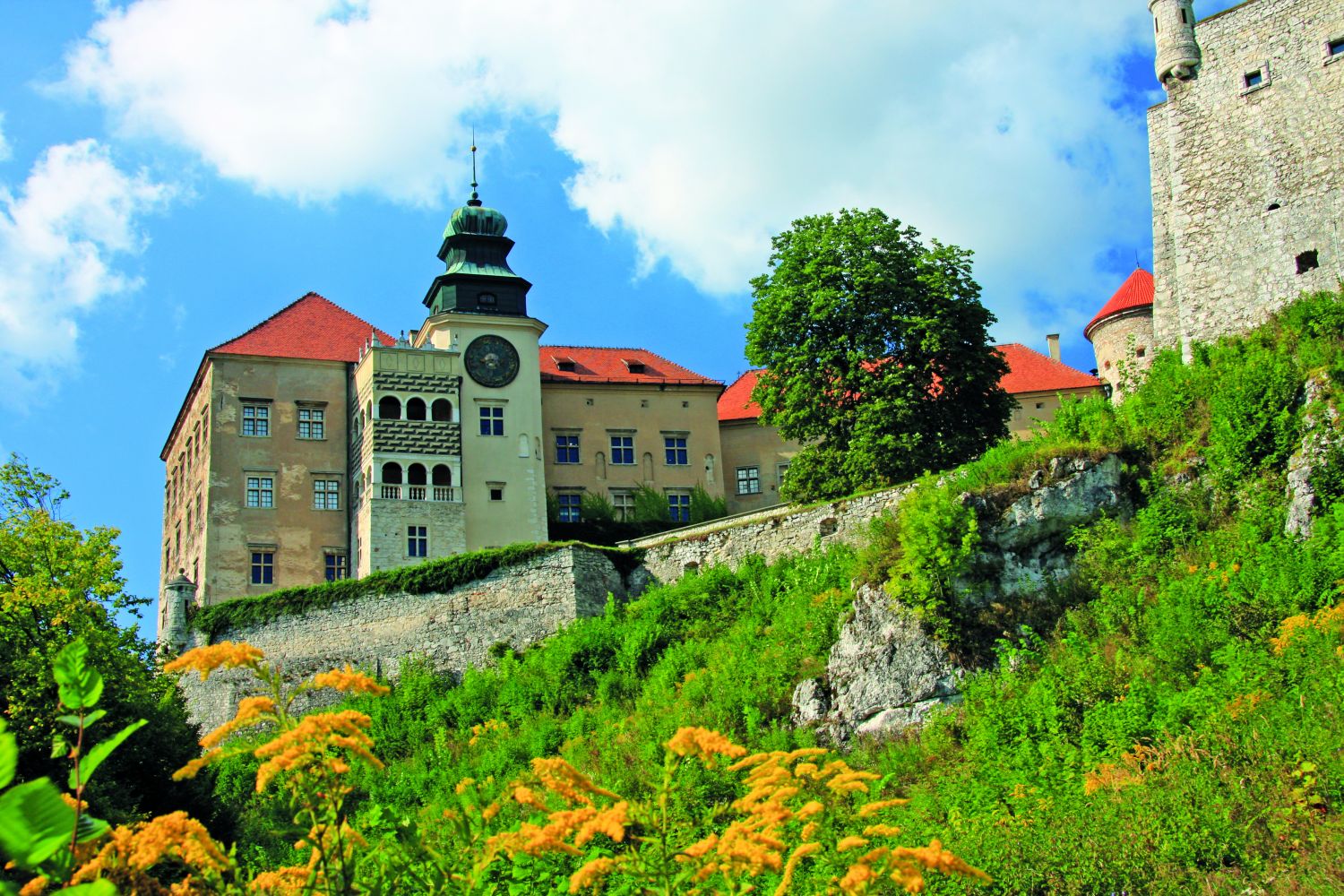 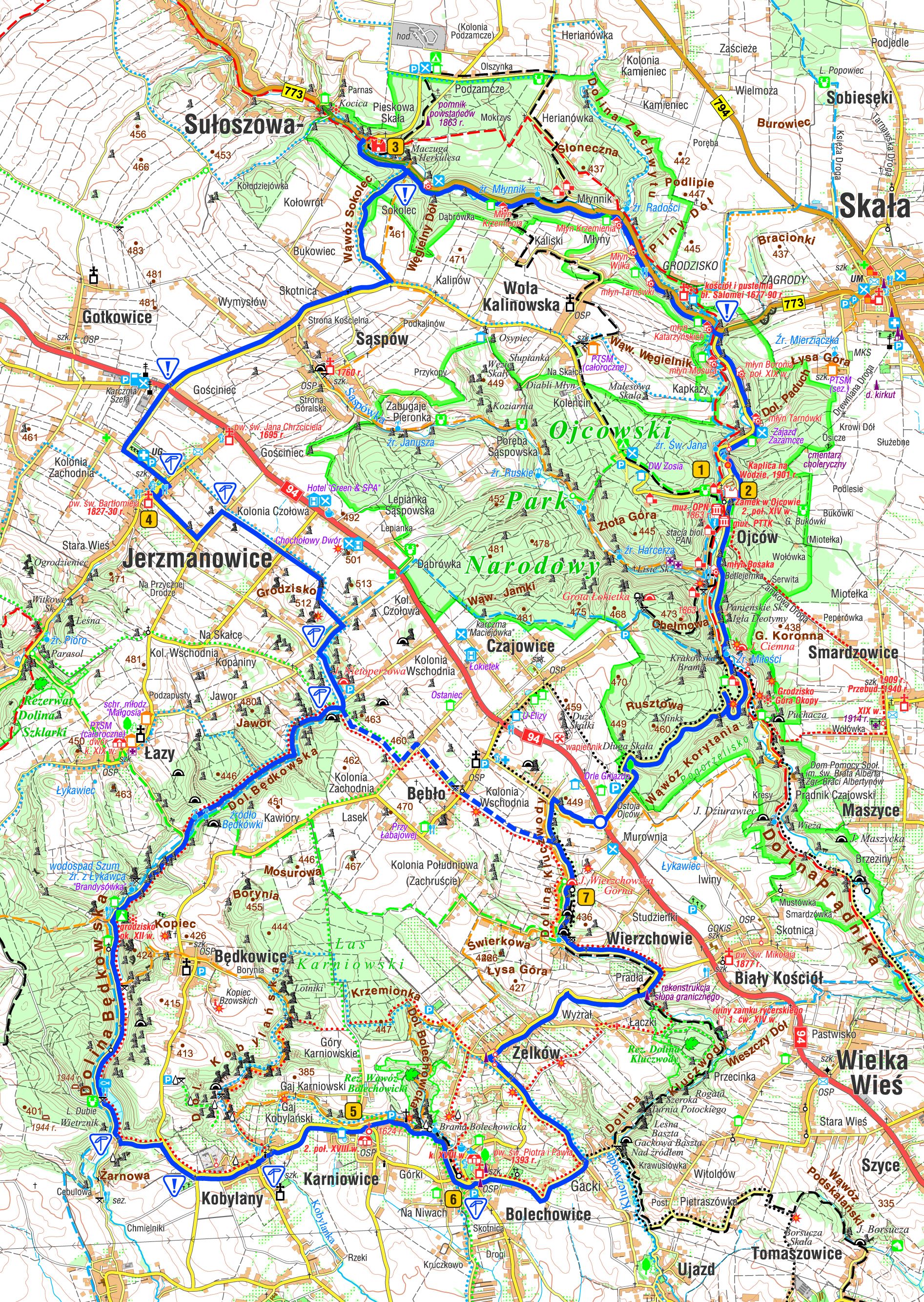