Route 6: Among quarries and mines

This one is an extremely attractive, but unfortunately quite a difficult trip. We will find on the route many monuments, scenic places and natural attractions. However, we will also encounter some difficult climbs. The trip begins from the building of the railway station in Krzeszowice. We go left, cross the tracks and turn left again onto the blue bike trail. We ride along the trail for about 8 km all the way to Dębnik. Along the way, we overcome a difficult climb in the village of Siedlec. We descend among the fields along a scenic road from Dębnik to Paczółtowice, where a wooden church can be seen. The route further turns to the left along the red bike trail. In the Eliaszówka Valley (Nature Reserve) we pass the ruins of the "Devil's Bridge", and after turning right we reach the Carmelite monastery in Czerna which is worth visiting. We continue down the valley and, after the sharp road curve, we turn onto the main road to the right, along Czerna. After the firehouse we turn left and cycle to Nowa Góra. We pass by the church, then turn left at the intersection (signpost to Krzeszowice) and descend along Miękinia. On the vast square with a bar and parking lot we turn right onto the green bike trail. We cycle through the area of the former quarry, then through a scenic ridge towards Wola Filipowska. We cross the road Kraków – Trzebinia and turn right after the railway crossing, and then left at the bifurcation. After 1.5 km we turn right, pass a car park with a high tower and turn onto the first road on the left. We climb following the signs of black trail, inspired by former mines, to reach the main ridge of Tenczyński Hump. The yellow trail leads us to the picturesque ruins of the "Tenczyn" Castle. We leave the hill (descending or hiking with the bike) along a steep path (yellow trail) towards the parking lot. At the end, we turn left onto the asphalt road and follow the red bike trail. Cycling along the trail, we pass through Tenczynek (church and wooden belfry) and return to Krzeszowice. Among the many monuments of this city, the 19th-century church and the Potocki family Palace are worth recommending.

1. Wooden church in Paczółtowice – from the beginning of the 16th century, single-nave, log structure. Inside there are fragments of the polychromy from the second half of 17th century and a valuable painting of the Mother of God from the 15th century
2. The "Eliaszówka Valley" forest reserve – covering about 107.2 ha. It covers part of the Eliaszówka Valley, with slopes covered with old-growth beech and hornbeam forests and riparian forest in the lower part. Numerous exposures of Lower Carboniferous limestones.
3. Monastery of the Discalced Carmelites in Czerna – built in the first half 17th century, picturesquely located on the forested slopes of the Eliaszówka Valley. The church and other monastery buildings with uniform Baroque furnishings are made of the black "marble" of Dębnik. It is also worth visiting the monastery exhibitions: antiques, oriental, and above all the one devoted to Saint Father Rafał – Józef Kalinowski (1835-1907), who was the prior of the local convent three times and was buried here after his death.
4. "Tenczyn" Castle in Rudno – see description of Route 10 on p. 23.
5. Church and wooden belfry in Tenczyn – a Baroque church from the first half of the 18th century and a wooden belfry of the pole structure, erected before 1748. A three-storey building, free-standing, built on a stone foundation.
6. Brick church in Krzeszowice – built in the mid-19th century, stands out among our neo-Gothic sacred architecture with original front facade, as well as an interesting interior. In the main altar there is a painting presenting the Homage of the Three Kings from the end of the 16th century.
7. Potocki Park and Palace Complex in Krzeszowice – founded by count Artur Potocki, who in 1816 inherited Krzeszowice together with the Tęczyn area. His son, Adam, built in the years 1850-59 a palace in the style reminiscent of the Italian Renaissance and founded a large park, full of old trees of native and exotic origin. Currently it is in the hands of heirs. 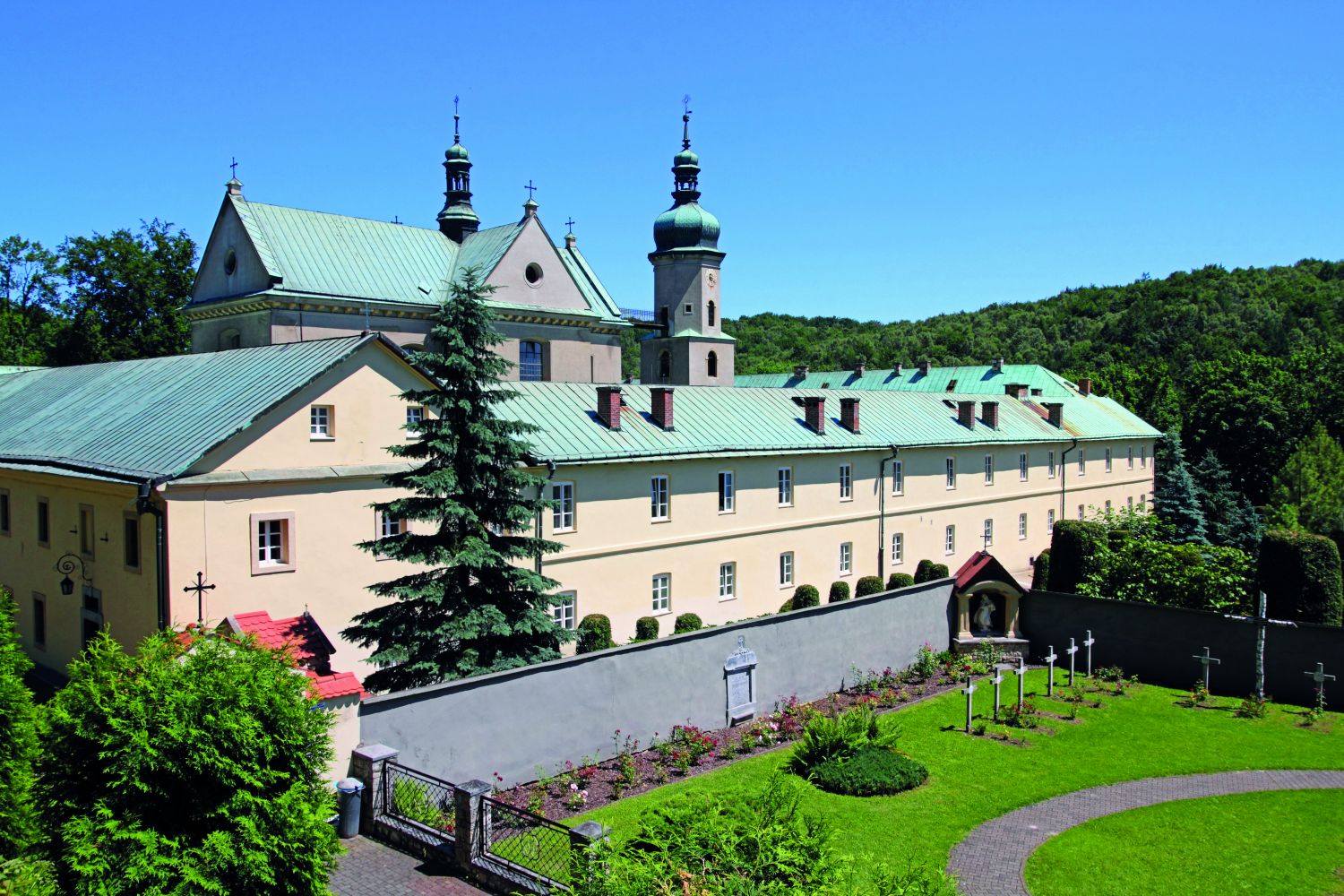 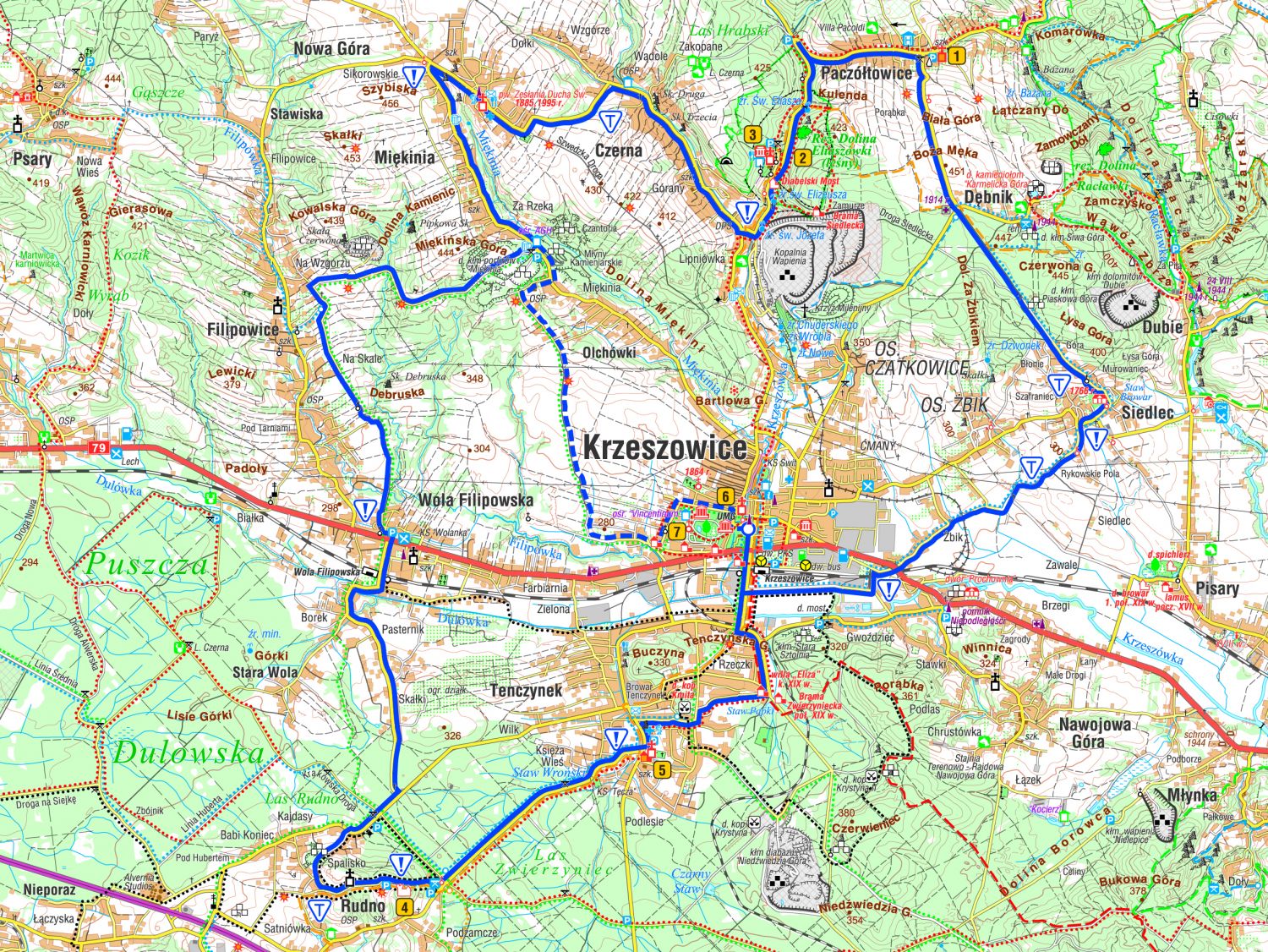