Route 47: Around Krynica Zdrój – pearl of the Polish health resorts

A very attractive route leading among the monuments of sacred architecture on the border of the Beskid Sądecki and Beskid Niski, starting in the pearl of the Beskids – Krynica-Zdrój. Due to several climbs, it requires some fitness preparation. We start the trip in front of the pump room in Krynica. We move north along the main road (J.Piłsudskiego Street) to the intersection with the road to Słotwina. We head left, after 1 km we pass a ski resort and a wooden Lemko Orthodox church. We then approach the most difficult section on the route, a steep uphill ride to the Biała Pass (in the final part we will have to get off the bicycle). Keeping the current direction, we go around the village farms, pass the shed and turn right 200 m further north to a well-visible dirt road. On the ridge we meet the yellow tourist trail, which we follow to the left. We go down about 150 m, turn right onto the dirt road and after a short (50 m) downhill we turn right. We take the forest gravel road down the Kamienica Valley to reach Roztoka Wielka. We pass a wooden Orthodox church and – slightly lower – we cross the road No 75, turn right diagonally, into a side road to Krzyżówka, which will lead us to the pass. We turn left onto road No 981 and go about 2.5 km down. Just before the sharp turn, we go right and descend into the Bereścianka Valley by the curve. We then take the Berest-Piorunka road going right to the scenic pass in the foot of the Babia Góra Mountain. We meet the Sądecki Bicycle Trail (yellow), which will lead us up to Tylicz, passing historic churches in Piorunka, Czyrna, and Mochnaczka along the way. In Tylicz, apart from the historic church, it is worth paying attention to the old market square buildings. We leave the market square by Piłsudskiego Street and -after 800 m – we turn right at the intersection and head at Krynica. We overcome the last, small climb, and then enter a steep downhill return to the promenade in Krynica.

1. Krynica-Zdrój Health Resort – one of the most famous resorts of this type in Poland. Its development in the middle of the 19th century was mostly driven by dr J. Dietl – a well-known balneologist. The treatments offered in Krynica are mainly based on mineral waters – sorrels, rich in calcium carbonate.
2. Jan Kiepura European Festival in Krynica-Zdrój – the former "Festival of songs and arias" – organized annually since 1967 in honour of the great tenor who made Krynica famous.
3. Krynica-Zdrój health resort buildings – built in two periods: the first one covers the years 1860-90, when Old Mineral Baths, Old Mud Baths, Spa House, Main Pump Room, spa chapel and larch theatre were built. In the second period, covering the interwar years, the New Baths, New Spa House and the Lwigród hospital were built.
4. “Jaworzyna Krynicka” Gondola Lift – the longest and most modern one in Poland. One of the most important ski resorts in Poland was created based on this lift, which currently offers several attractive ski slopes.
5. Wooden Orthodox church in Krynica-Słotwiny – a former Greek Catholic church built in 1887-1888. Included in the Małopolska Wooden Architecture Trail.
6. Wooden Orthodox church in Roztoka Wielka – a former Greek Catholic church, built in 1819 in the West Lemko style.
7. Wooden Orthodox church in Piorunka – built in 1798. Inside, there is a beautiful painting of the Lemko shepherd – a rare example of the secular scene on the iconostasis.
8. Wooden Orthodox church in Czyrna – built in 1893–94, according to the design of the French architect Delavo.
9. Wooden Orthodox church in Mochnaczka – erected in the 18th century in the West Lemko style.
10. The church in Tylicz – a wooden church from 1612 with log structure and gable roof. Inside, a polychromy from 1960, rococo altars and a picture of the Virgin Mary with the Child from the 16th / 17th century. A stone belfry from 1803 by the church. Included in the Wooden Architecture Trail. 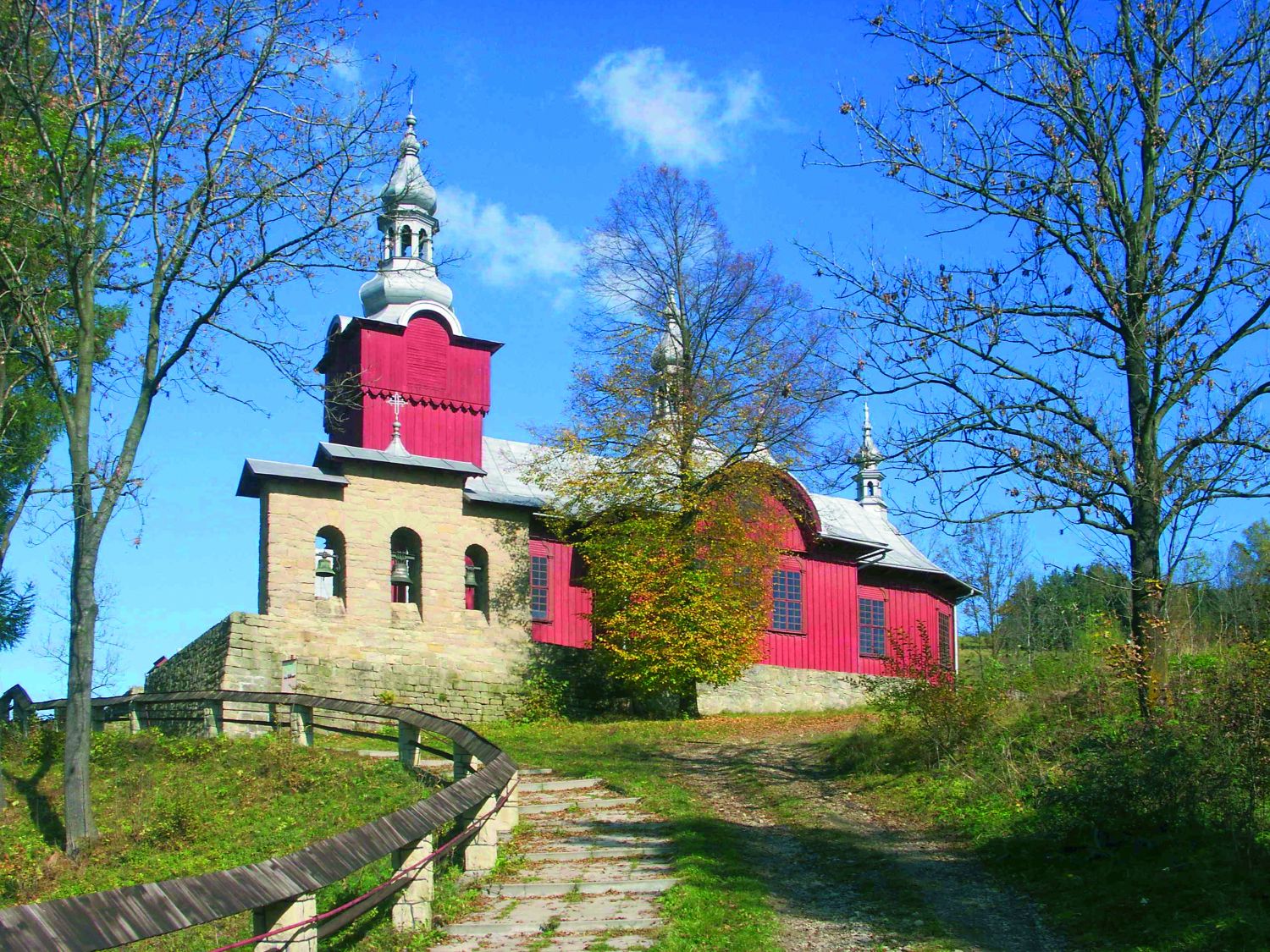 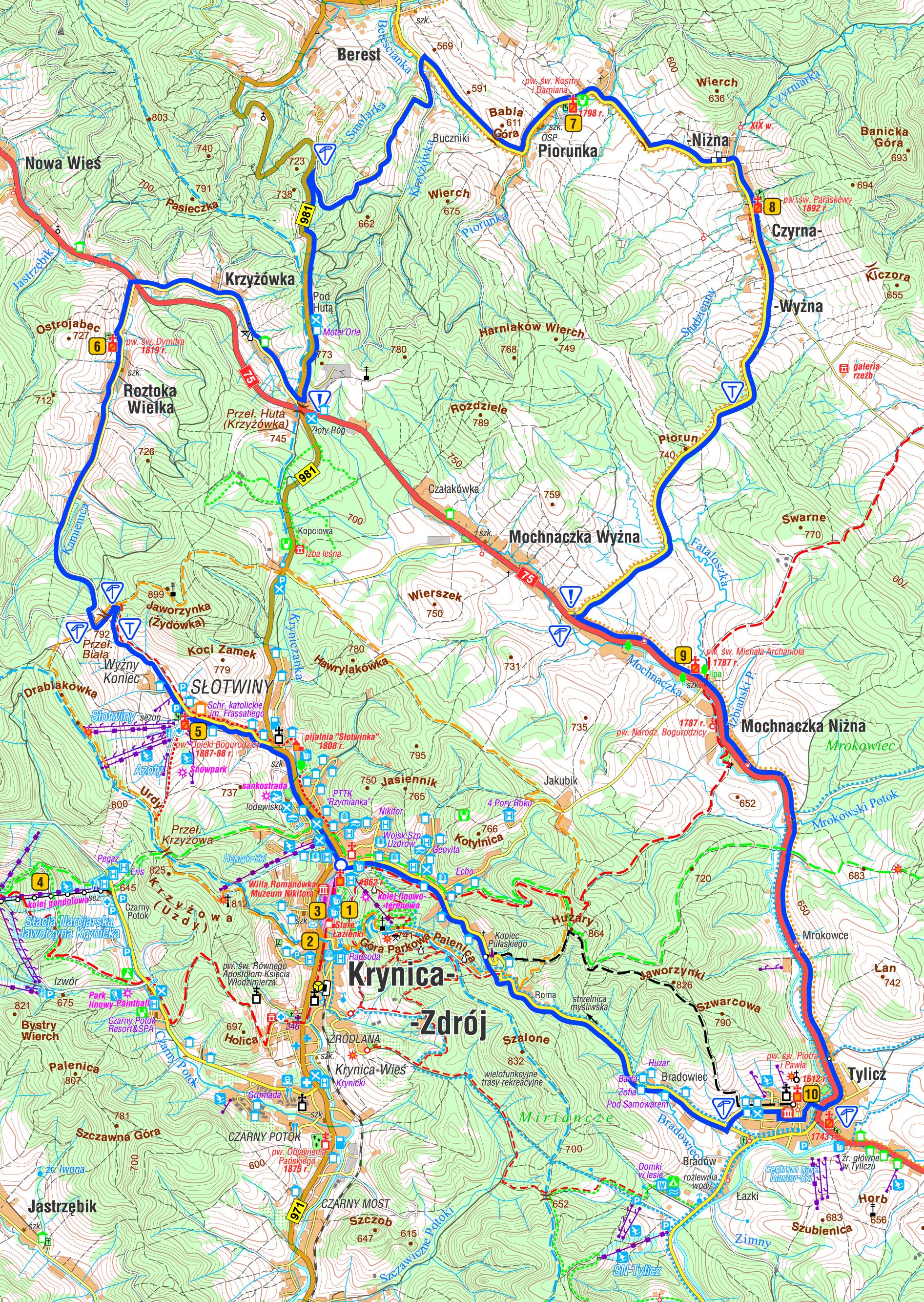