Route 45: Along the Poprad valley

We start this not too long and fairly easy trip in Stary Sącz. The town is famous for several monuments, some of which deserve special attention: the old buildings, the sanctuary and the monastery of Poor Clares, "House on the Pits", church of Sts Margaret and Elisabeth, cemetery church of Sts Roch and Sebastian. A big attraction from the modern times is the Papal Altar. We set off on the east side of the railway station by Papieska Street, in front of the Papal Altar. We cross Topolowa Street and follow the green bike trail turning right diagonally, then we go to the national road, which we carefully cross. After a few hundred meters, the picturesque Poprad River will appear on the left. We change the green trail for the red bike trail and enter Barcice (historic church). We stay at the trail, we leave the main road behind the chapel, cycling into a side street to the left and cycle around the village, along Poprad. After the stadium, we turn left, cross the bridge, and turn right just after it. We cycle the Poprad Valley for about 5 km to Rytro, where on the left we can see the ruins of a medieval castle on the hill. Leaving the bike trail, we cross the bridge, then we turn right on the national road, and after 400 m we turn left through a railway crossing. We pass by the church, then – slightly higher, next to the "Ryterski Raj" resort – we turn right. We cycle up for the scenic ridge with a wind farm on the right. We follow the curve to the left, slightly higher along the green trail, then we turn right and start a long descent to the valley. We go left along the stream, turn right after 600 m, and after a short climb descend to the Przysietnica Valley. On the main road we turn left and in the centre of the village, in front of the church, we turn right and head at Moszczenica. The scenic ridge, along the green bike trail, descends to Moszczenica Niżna. Here we leave the green trail for a moment to visit a wooden church, and then we go to Stary Sącz, where the route ends.

1. Buildings of Stary Sącz – a historic, medieval street layout of the town based on Magdeburg Law. Along the streets there are one-story urban-type houses from the 18th–19th century.
2. Church and monastery of Poor Clares in Stary Sącz – founded in the 13th century by Princess Kinga, who was later a saint. The Gothic church, the form of which is preserved to this day, was built in the middle of the 14th century. Monastery buildings from the 16th century were built on the site of older, wooden ones. In the church, we can admire Baroque altars, pulpit in the form of the Tree of Jesse and the chapel of St Kinga.

3. "House on the Pits" in Stary Sącz – built at the end of the 17th century. It originally belonged to tanners who had in the courtyard lime pits that were needed for the tanning process. From 1956, it houses the Regional Museum.
4. Church of Sts Margaret and Elisabeth in Stary Sącz – erected at the turn of the 14th and 15th century in the Gothic style. A tower was added in the 17th century. Interior design mainly from the 18th and 19th century.
5. Cemetery church of Sts Roch and Sebastian – built in the 16th century in the Early Baroque style. On the walls of the building we can see the 19th-century epitaphs of the local inhabitants. Inside, there are fragments of the triptych from the beginning of the 15th century and the Renaissance-Baroque main altar, which are particularly worth seeing.
6. The Papal Altar in Stary Sącz is an extraordinary reminder of the canonization of blessed Kinga by the Holy Father John Paul II in 1999 in the Stary Sącz Town Park.
7. The church in Barcice – built of bricks in 1901. The interior furnishings largely come from an earlier wooden church, which burned down in 1882.
8. The ruins of the castle in Rytro – picturesquely situated on a hill. The castle, probably built at the end of the 13th century, served to protect the customs chamber above the Poprad river. No longer used and abandoned in the 16th century, it fell into ruin.
9. Wooden church in Moszczenica – built in the 17th century, then repeatedly renovated and rebuilt. Inside, it is worth paying attention to the Gothic painting of St Sophia from 1480. Next to the church there is a stylish belfry erected simultaneously with the church. 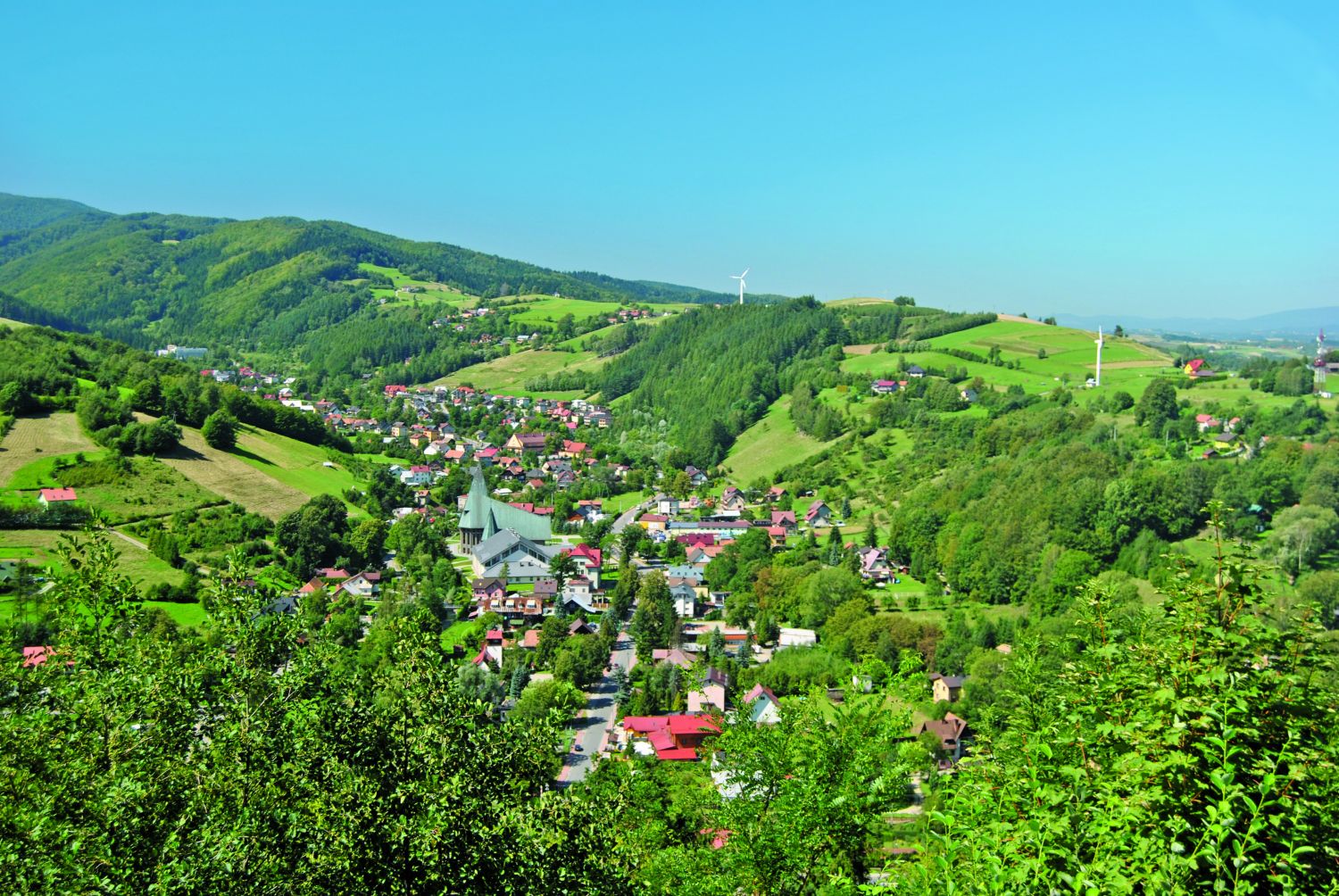 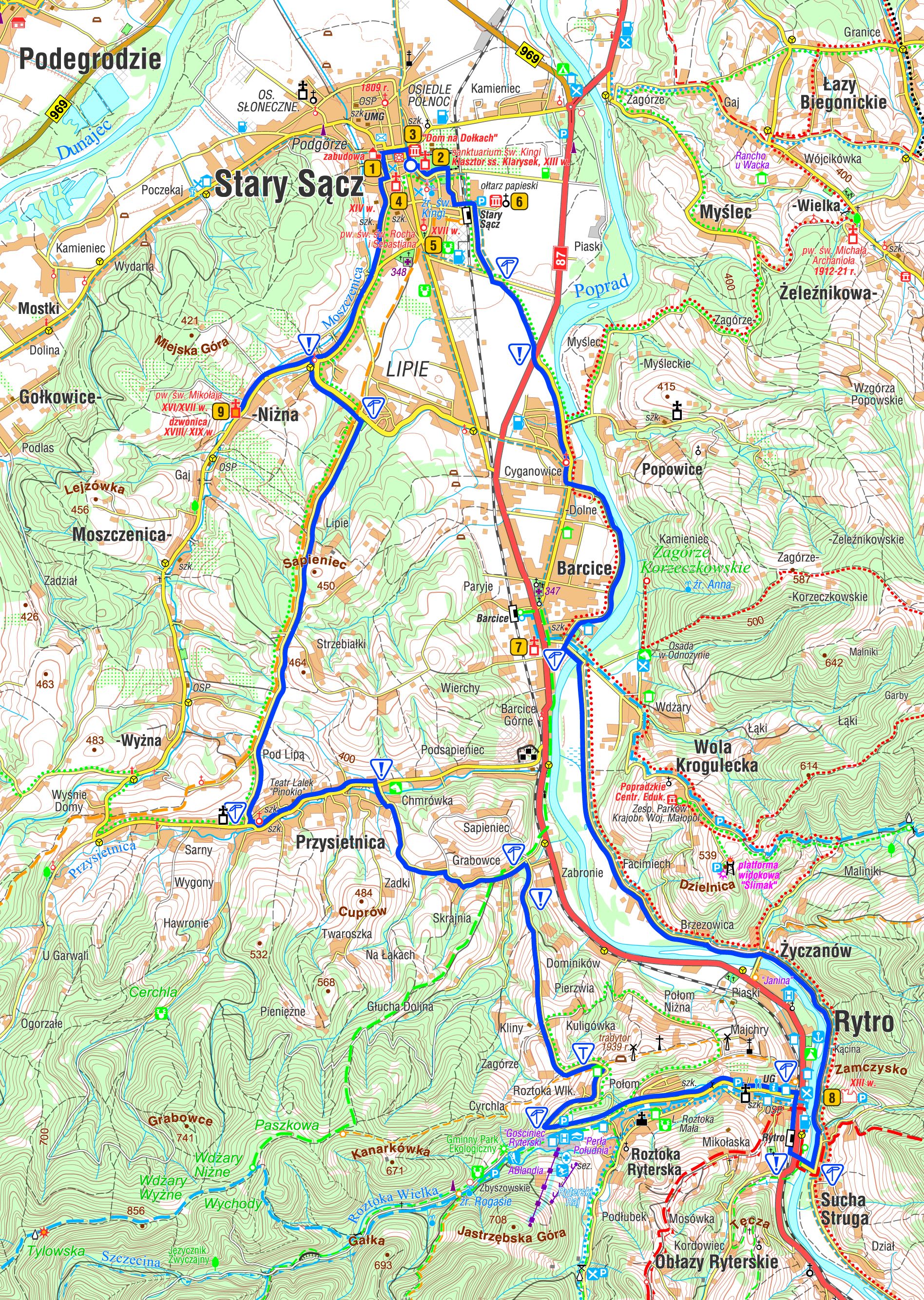