The route is quite long and difficult, with a few demanding climbs, and ... beautiful views. It abounds in numerous traces of culture and monuments of the Lemkos who formerly lived in these areas. We start at the market square in Gorlice, heading south along Mickiewicza Street, we cross the bridge on Ropa and go straight ahead along road No 993. At the stadium we turn right to follow the blue hiking and yellow bicycle routes, and along Sękówka, near the palace, we reach Sękowa. After the bridge we can admire an impressive wooden church (UNESCO World Heritage List). We return to the main road, cross the bridge again and – after 200 m – we turn left. We then follow the yellow bike trail up to Małastów. In Owczary we pass another site from the UNESCO List – a wooden Orthodox church. The asphalt road ends, we climb the gravel road to the pass, and then steeply descend to road No 977, where we turn right. We pass a brick church in Małastów, slightly further turn left to visit a similar object in Pętna. We climb the long, arduous way to the Małastowska Pass. On the pass we can see a large cemetery from the World War I. We turn right and continue the climb until the junction (right road leads to the hostel), where we choose the left arm and descend to Nowica, passing two historic churches. We take the latter, turn right and start another climb up the slope of Magura Małastowska, after which we descend to Bielanka. At the side street, on the right, we have another object inscribed on the Wooden Architecture Trail – a church from the 18th century, and at the exit from the village on the left – a modern brick Orthodox church. Below the village we pass a forester's lodge with a trout fishery and – a bit further – a camping site. We leave the forest and turn left (green trail). We approach a short climb, then a ride down to Szymbark and its monuments: a wooden church, an open-air museum and a manor. At the height of the church we turn north and cycle down the narrow asphalt to the Nadjazie settlement. At the end of the road we turn right and take a steep dirt path to the asphalt road. We move straight along the river towards Gorlice. After 1 km, we turn right at the intersection, and 100 m further, just before the bridge, to the left – into the narrow road. After another kilometre, we leave the asphalt road turning left and driving straight ahead. After a few meters we cross the footbridge to the other side of Ropa and continue driving down the river along a dirt path. We return to the left bank of the river by another footbridge, turn right and return to Gorlice along the asphalt road.

1. Parish church in Gorlice – built in the 1920s. The interior is decorated with paintings by, among others, J. Mehoffer, P. Styka, J. Stachiewicz.
2. Cemetery Hill (357 m a.s.l.) in Gorlice with the central cemetery-mausoleum of the 1915 Gorlice battle situated on the top.
3. The Karwacjan family Manor in Gorlice – built in the 15th century in the Renaissance style. It was destroyed during World War II. In the post-war years, as a result of reconstruction, its former appearance was restored. Currently, the seat of the "Dwór Karwacjanów" Art Gallery.
4. Wooden church in Sękowa – one of the most beautiful monuments of wooden religious architecture. It was built around 1520 and has wooden structure with shingle walls and roof. In the 18th century a tower was added together with "sobotas" – a characteristic roofing adjacent to the temple walls. The interior design is contemporary – the former, historic one was destroyed during World War I. The temple is inscribed on the UNESCO World Heritage List.
5. Wooden church in Owczary – built in 1653, renovated many times. Inside, an iconostasis from the 18th century and polychromies from 1938. Object inscribed on the UNESCO World Heritage List.
6. Church in Małastów – a former Greek Catholic church built in 1805.
7. Church in Pętna – a former Greek Catholic church from 1916. Next to it there is a wooden belfry and a church cemetery. The temple is shared by Greek Catholics and Catholics.
8. Cemeteries from World War I – see the description of Route 22 on p. 47.
9. Orthodox church in Bielanka – built in 1773. Between the nave and the presbytery, there is a complete Baroque iconostasis from the 18th century.
10. Wooden church in Szymbark – dates back to 1782, it has facade unusual for wooden temples – modelled on the frontal facades of brick Baroque churches.
11. Folk Architecture Centre in Szymbark – a small open-air museum, in which we can admire residential and farm buildings, mostly from the 19th century, moved from nearby villages.
12. Manor in Szymbark – a manor from the first half of the 16th century in the style of the Italian Renaissance. Attention should be paid to the four corner bow windows and the beautiful attic. 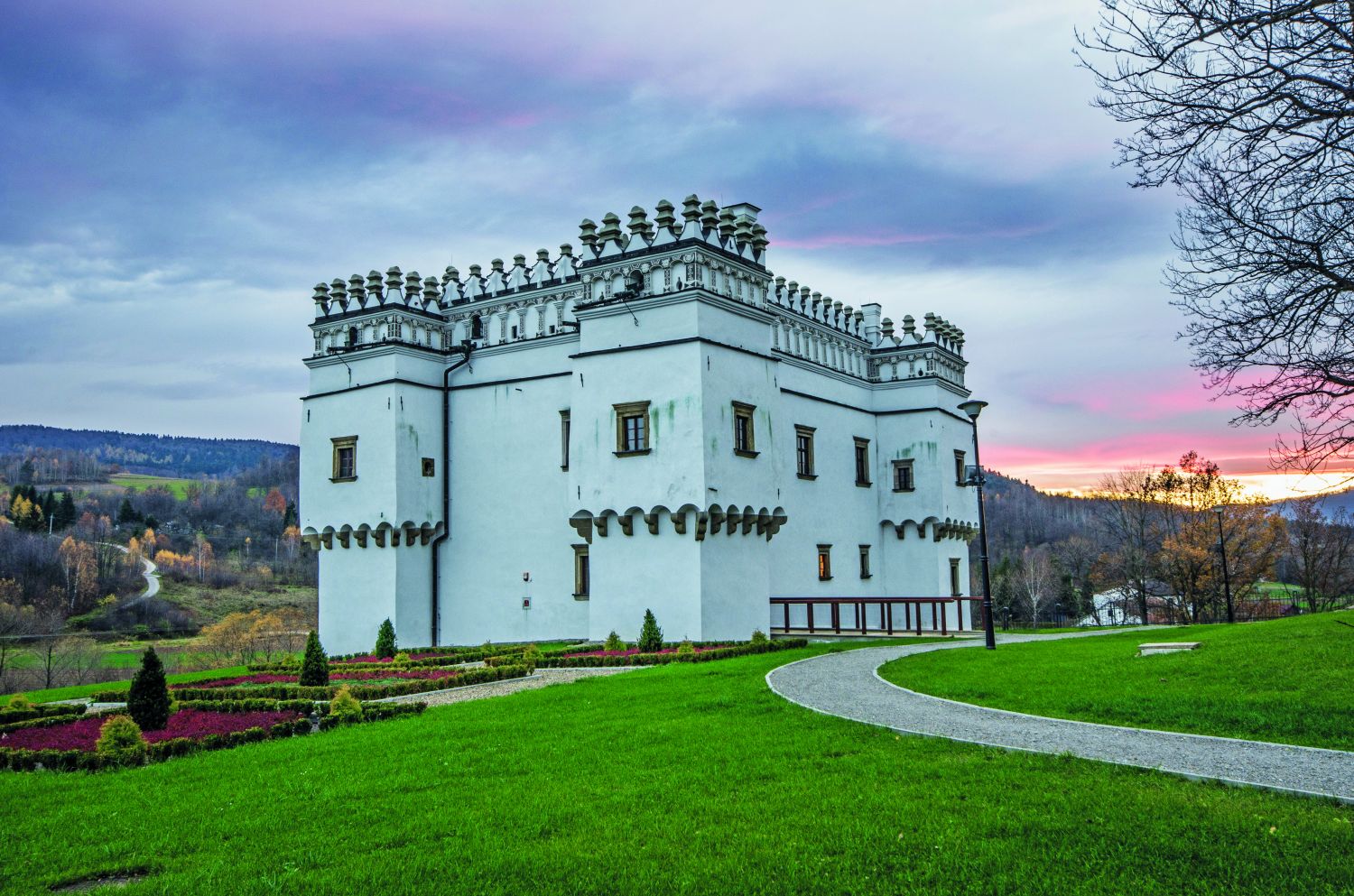 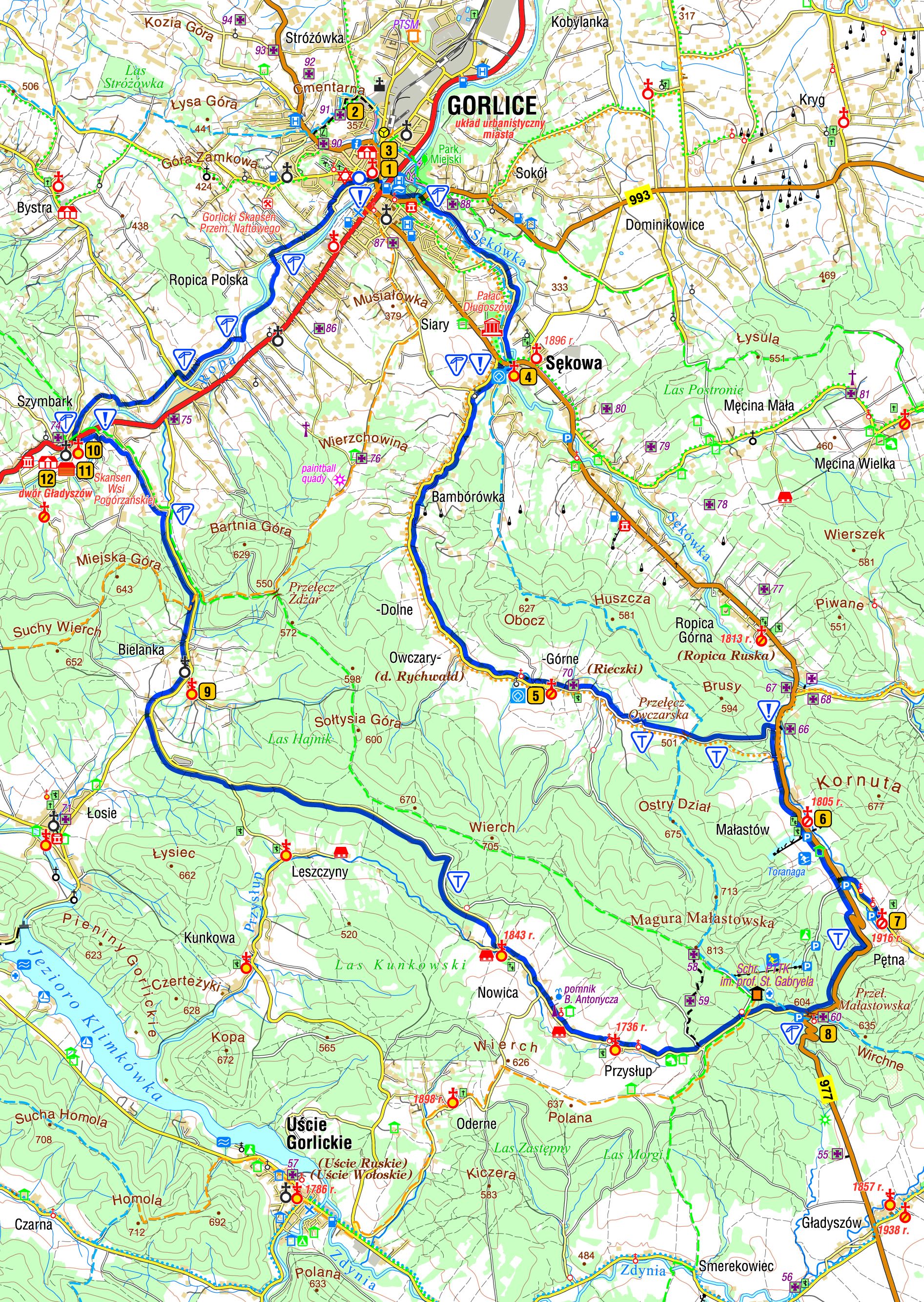 PDownload the route as GPX