Route 34: From "Little Kraków" to Binarowa

This trip starts in Biecz – one of the oldest, and until the 16th century, also the largest towns in Poland, called the "Little Kraków". We cycle from the town hall in Biecz, along Węgierska Street, then turn right behind the church into Bochniewicza Street. We end this quite difficult climb by turning left into Harta Street, and then, moving next to the picturesque cemetery, we descend to the main road. We turn right, then once again right after the bridge, and head towards Strzeszyn. Before the ruin of the former school (and shop), we follow the bike trails and turn left. Less than 2 km further we leave the green trail and turn right along the yellow one. We enter a steep climb to the top. Keeping to the trail, we pass Kwiatonowice, and 5.5 km further, at one of the intersections, we turn right to Sitnica. We cycle by the sharp descent to the valley, where we turn right along the main road, and we go to Rożnowice. After entering the provincial road No 980, we go straight ahead, and after a while we pass a wooden church situated on a hill. After the next 5.5 km we reach Binarowa. Here, we make an obligatory stop to see the architectural masterpiece, i.e. the wooden church from about 1500 inscribed on the UNESCO World Heritage List. To avoid driving along the provincial road, we leave it right behind the church (and stream) and follow the yellow bike trail by the side street to the right. We climb the hillside of the Dział Peak along quite demanding uphill. However, we do not go to the top, as we turn left earlier, between the farmsteads. We cross the intersection and turn left after the first buildings at the bifurcation. At the beginning we ride along a flat, scenic ridge along the copse, and then, along the Jewish cemetery in the forest, we descend quite steeply to Biecz. We go back right, down Kazimierza Wielkiego Street, to the market square, where we finish the trip.

1. Town hall in Biecz – built in the second half of the 15th century. As a result of later transformations, it lost its Gothic appearance. The current body of the town hall dates from 1830. The Renaissance tower adjacent to the town hall was erected in 1569. The medieval jail, where testimonies were being forced and prisoners held until execution, was located in the basement of the tower.
2. The fortification system of Biecz – composed of defensive walls, towers and a barbican. Their history dates back to the 14th century. At that time, there were 17 towers within the city walls, served by guild craftsmen. With the change of war technique in the 17th century, they lost their significance and fell into ruin. Only two towers have been preserved to the present day: the Councillors’ Tower and the Blacksmiths’ Tower.
3. Kromer House in Biecz – a Renaissance tenement house from 1519, in which Marcin Kromer, an outstanding humanist, historian and music theorist, spent his childhood. Currently, the seat of the Biecz Area Museum.
4. Wooden church in Rożnowice – built in 1756, it used to be considered as one of the most valuable wooden Baroque churches. Unfortunately, in 1992 it mostly burned as a result of a lightning strike. On the eastern wall of the presbytery it is worth seeing the Baroque cross, decorated with volute ornaments.
5. The wooden church in Binarowa – listed on the UNESCO World Heritage List. It dates from 1500 and the tower added in 1596 is considered to be the oldest in Poland. The church is known for its beautiful, perfectly preserved polychromy, made in 1641-50. The rich painting decorations of the walls deserve special attention as well. On the ceilings there are fragments of an older, patron polychromy. 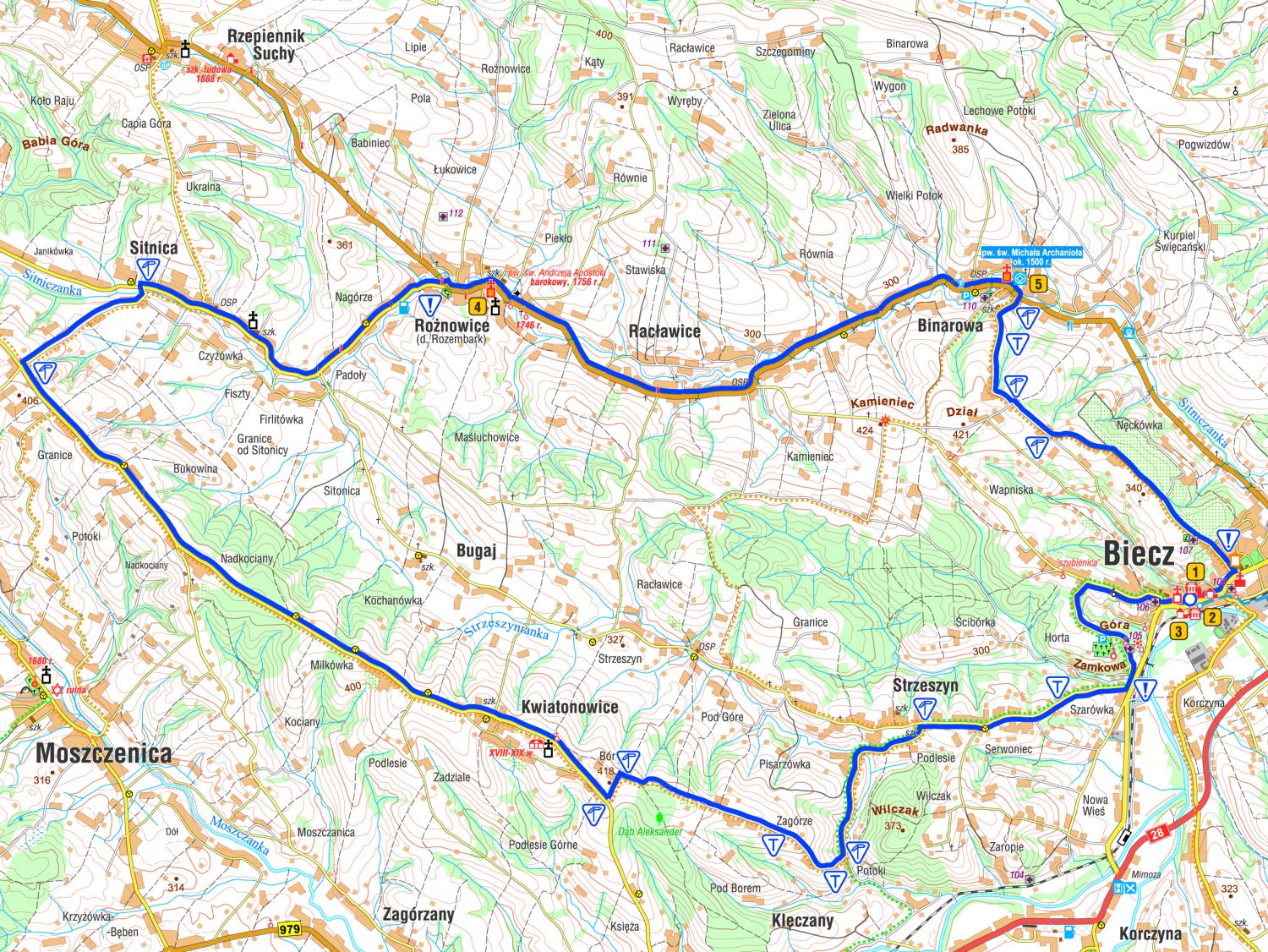