Route 28: In the land of many cultures

This trip, starting in Tarnów, is an attractive route due to the varied terrain and accumulation of tourist attractions. We start at the railway station and go along Narutowicza Street, we pass a wooden church, and after the tracks another wooden church of St Trinity. We come back to Ziaji Street, to turn slightly further along the tourist routes to the right, onto al. Tarnowskich. We pass the Tarnów bypass and, next to the bathing beach, we climb up to St Martin's Peak. On the right we have the ruins of Tarnowski Castle, and after turning left, a bit further – a wooden church from the 15th century. We cycle on the scenic ridge along the Zawada buildings, to finally turn right following the yellow tourist trail. At the next bifurcation we leave the trail, going right again. We cycle on the flat, uncovered ridge to reach road No 977, and then turn left. On the sharp curve, next to the forest parking lot, we turn right, and follow along the ridge road the yellow trail to Słona Góra, reaching three cemeteries from World War I. We take the yellow trail (steeply at the end) to Pleśna. We cross the railroad tracks, turn right at the intersection, and after a while, we turn left before the cemetery. Next to the neo-Gothic church we climb arduously to Żabno. Already on the ridge we turn right and go down the serpentine to the hamlet of Tracze, where we turn left at the intersection, and then right at the bifurcation. We go straight through Błonie to reach Zgłobice, where we turn right at the manor and park complex with a hotel. A little further we meet the green trail, which leads us to the Tarnów bypass. We carry the bike up to the bridge and get to the other side of the bypass, where we enter the bike path along Krakowska Street and go to the city centre.

1. Tenement houses at Rynek 20-21 in Tarnów – erected in the 1560s. They belong to the best preserved Renaissance buildings of this type in Poland. Currently the seat of the District Museum in Tarnów. Information: www.muzeum.tarnow.pl
2. Tarnów Town Hall – built in the mid-14th century, it was given its current Renaissance appearance after the reconstruction at the end of the 16th century. It houses a branch of the District Museum in Tarnów, where a permanent exhibition is presented – In kontusz and with sabre – Gallery of Old Art from the collection of Sanguszko princes.
3. Tarnów Cathedral – the most representative monument of the city, erected in the 14th century. It owes its present neo-Gothic appearance to the reconstruction undertaken in 1899-1900. It is famous for its Renaissance tombstones, which are considered one of the most valuable in Europe. These include, in particular, a two-story monument of hetman Jan Tarnowski and his son from the second half of the 16th century and the tombstone of Barbara née Tęczyński from 1521.
4. Bima in Tarnów – the podium from which the Torah was read. It is a remnant of a synagogue built in 1661 and destroyed by the Nazis in 1939.
5. Wooden church of Our Lady of the Scapular in Tarnów – consecrated in 1440. At the main altar we can admire the painting of the church's patron.
6. Sanguszko Palace in Tarnów-Gumniska – dates back to 1799. Numerous reconstructions resulted in creating a magnificent but not so much impressive magnate residence.
7. Castle ruins on St Martin's Hill – from the 14th / 16th century. Originally it was a stone and brick building with a huge tower, perimeter wall and gate. As a result of the transformations carried out in the 16th century, it became surrounded by bastion fortifications. Abandoned since the end of the 17th century.
8. Wooden church in Zawada – built in the 15th century in the Gothic style. Noteworthy are the ogival Gothic portals and remains of forged fittings. Late Gothic bas-reliefs and Baroque sculptures can be found in the church's interior.
9. War cemeteries from World War I – see description of Route 22 on p. 47.
10. Manor complex in Zgłobice – from the second half of the 19th century, surrounded by a park with an alley. After a general refurbishment in 2014, a restaurant and hotel "Dwór Prezydencki" (Presidential Manor) was opened in it. 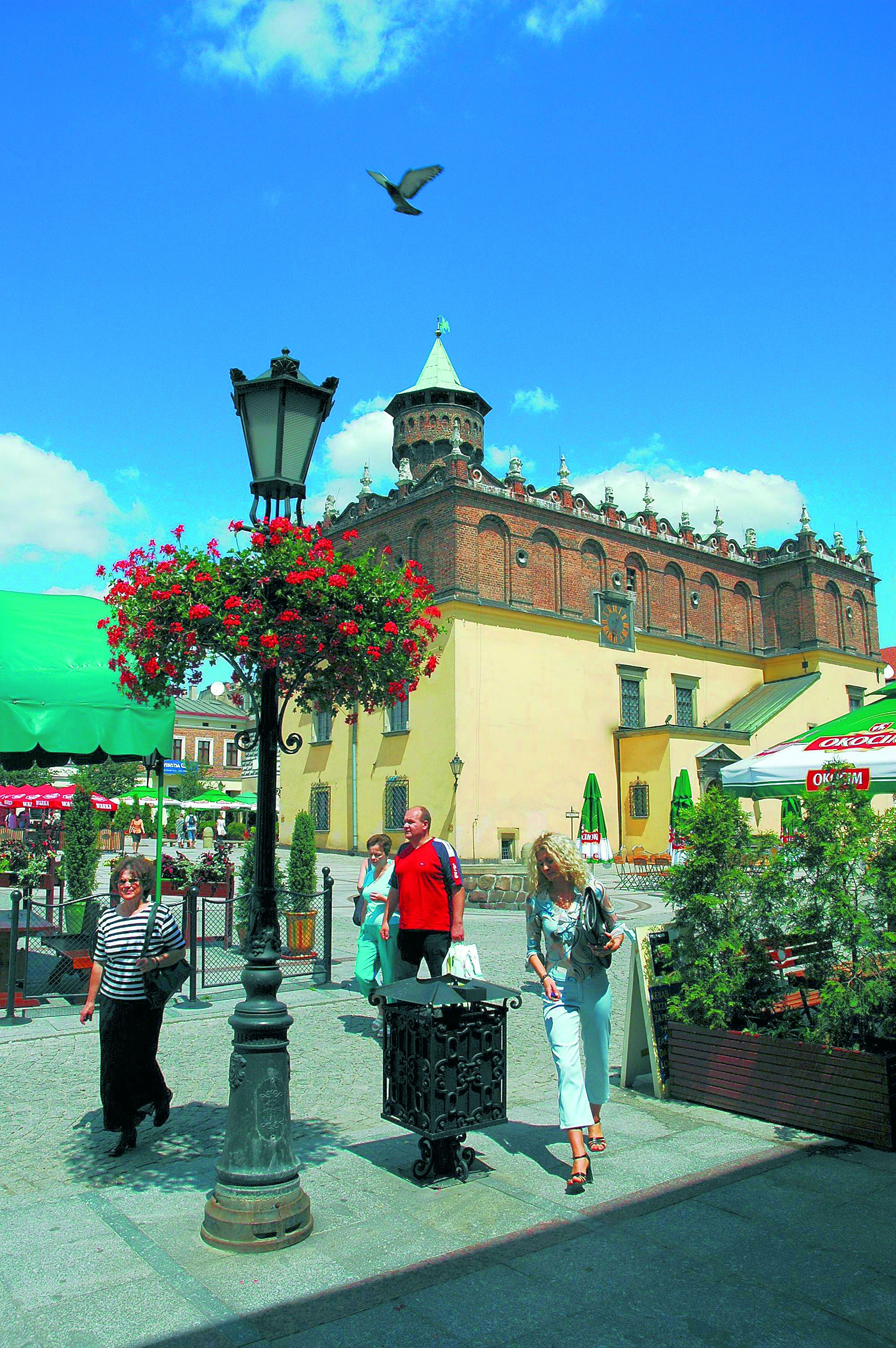 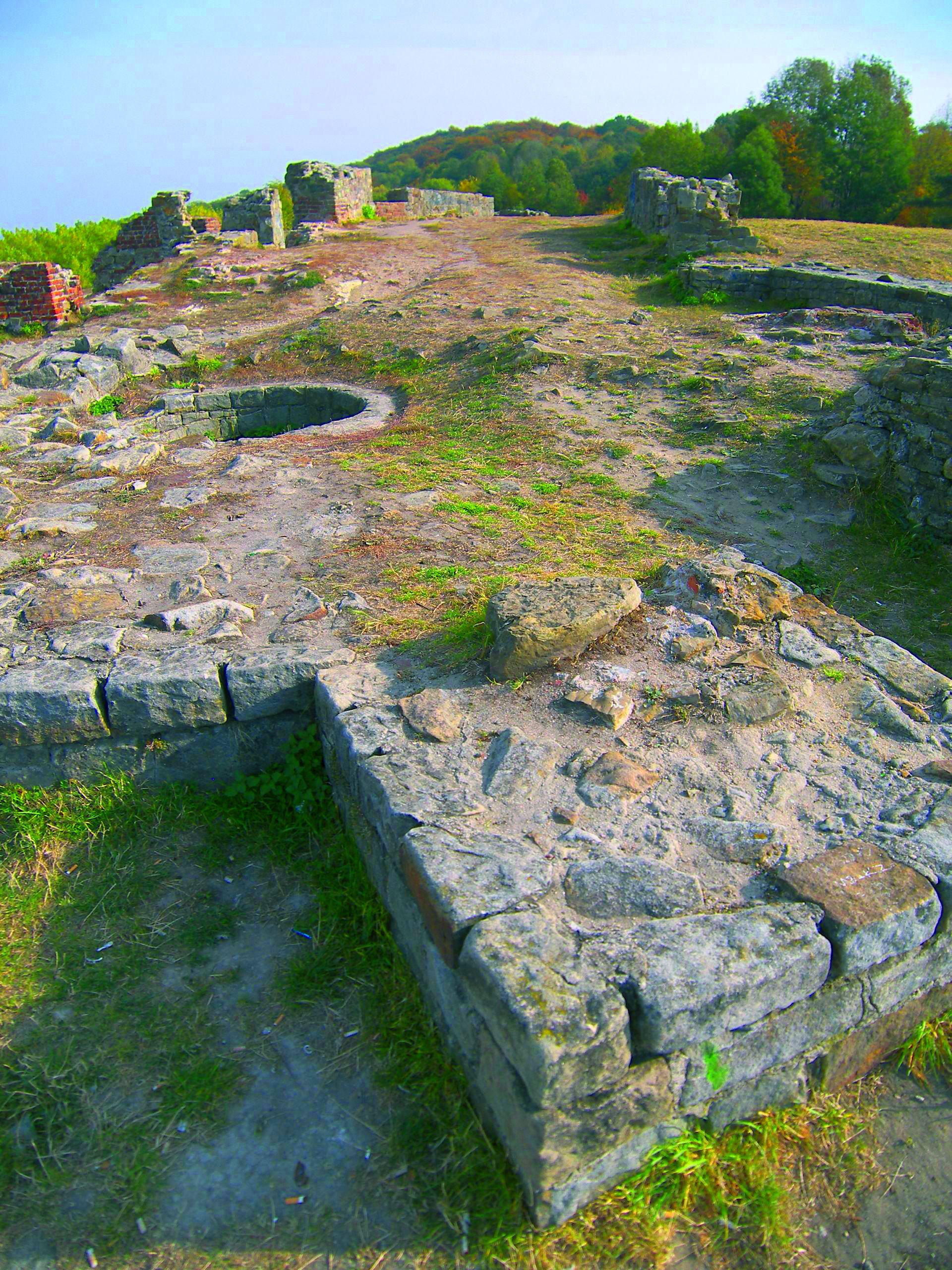 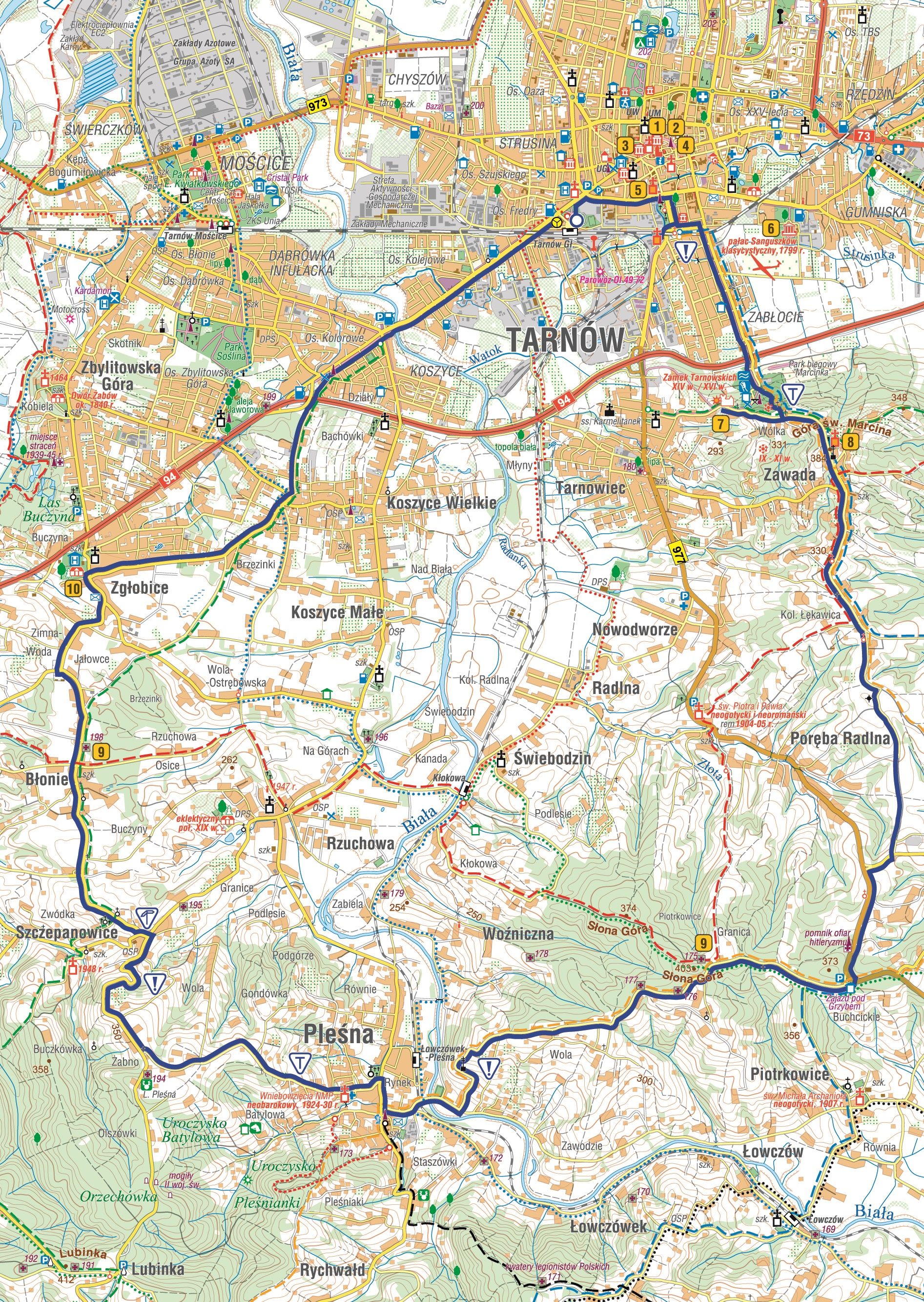