Route 27: From the source of St. Stanisław to the grotto of Lourdes

The first half of the route is flat and very easy, in the second part there are some tiresome climbs and a technically demanding descent. This effort will be compensated by beautiful views and interesting monuments. We leave the market square in Brzesko by Sobieskiego Street, passing into Czarnowiejska Street. After 900 m, next to the Jewish cemetery, we turn right diagonally, at the roundabout we cross Solskiego Street and cycle straight east along Szczepanowska Street. We pass a horse stud, railway tracks, A4 highway and finally reach Szczepanów. We can see the historic buildings of the market square, a classicistic church, a chapel, the spring of St Stanislaus and the Sanctuary of St Stanislaus. We leave the village along the road to Dębno. We cross the highway again, in Sterkowiec we cross the tracks, in Maszkienice at the chapel we turn left and pass the church. In Dębno, we cross national road No 94 and head south. We pass the castle, and a little further the late Gothic church, after which we turn left on the blue tourist trail and climb the scenic ridge. We cycle up a dirt path, and then, from the chapel an asphalt one, up to Kamionka. At the junction, we leave the trail, turning right. The main road will lead us right again, and on its curve, we shall go straight ahead, following the yellow bike trail, then, by a steep descent, we approach Porąbka Uszewska. In the centre of the village – the sanctuary and the grotto of the Virgin Mary of Lourdes. At the intersection, we turn left and then right to reach the ridge of Bocheniec with a long climb. At the peak we turn left into św. Anny Street, we pass the chapel and visible traces of the 9th-10th century stronghold. We continue to Brzesko along the red trail. First, we encounter a steep downhill path (it is better to get off the bike!), and then we climb by the asphalt road. We turn right, then left and reach Okocim Górny. We pass the old school building from 1895, the neo-Gothic church from 1891 and descend to Okocim. On the left we have the Goetz-Okocimski family Palace and Park Complex, and a little further on the right – the "Okocim" brewery. We enter the national road No 75, pass the roundabout going straight and return to the market square.

1. The urban layout of the Old Town in Brzesko – consisting of the market square, adjacent streets and a complex of tenement houses from the turn of the 19th and 20th century with Art Nouveau ornaments.
2. The church in Brzesko – built in the 15th century. It is maintained in the Gothic style, with neo-Gothic elements from the turn of the 19th and 20th century.
3. Wooden buildings in Szczepanów – urban layout of the village from the 18th century, in which wooden buildings still dominated until mid-20th century.
4. Sanctuary in Szczepanów – associated with the cult of St Stanislaus, bishop of Kraków and martyr. The main pilgrimage centre is a Gothic church founded by Jan Długosz in the 15th century and connected with the new one in 1914. At the birthplace of the legendary saint there is a source and a chapel from the 19th century. Other monuments of Szczepanów include the church of St Stanislaus dating from the 18th century.
5. Castle in Dębno – erected around 1470–1480. After the destruction during World War II, it was thoroughly renovated. This is the only example of a small medieval castle, with an almost exclusive residential function, that can be found in the Małopolska Region. Information: www.muzeum.tarnow.pl
6. The church in Dębno – built in 1502–04 from brick and irregular ashlars. It is an excellent example of post-Gothic religious architecture. It is worth paying attention to portals in the "Długosz" style and valuable stone wall tabernacle.
7. Sanctuary in Porąbka Uszewska – founded at the beginning of the 20th century. It is connected with a copy of the statue of Our Lady of Lourdes, placed in a stone cave.
8. The stronghold at the Bocheniec Hill in Jadowniki – the remains of an early medieval stronghold from the 9th–10th century. It was one of the most important defensive objects of the tribal period, related to the state of Vistulans existing in the Małopolska Region.
9. The palace and park complex in Okocim – built in the Neo-Baroque style in the years 1898-1900 by Jan II Albin Goetz – the owner of the Okocim brewery. In addition to the palace, the complex also includes a guardhouse, an entrance gate with a fence and a conservatory located in a large park designed in the English style. 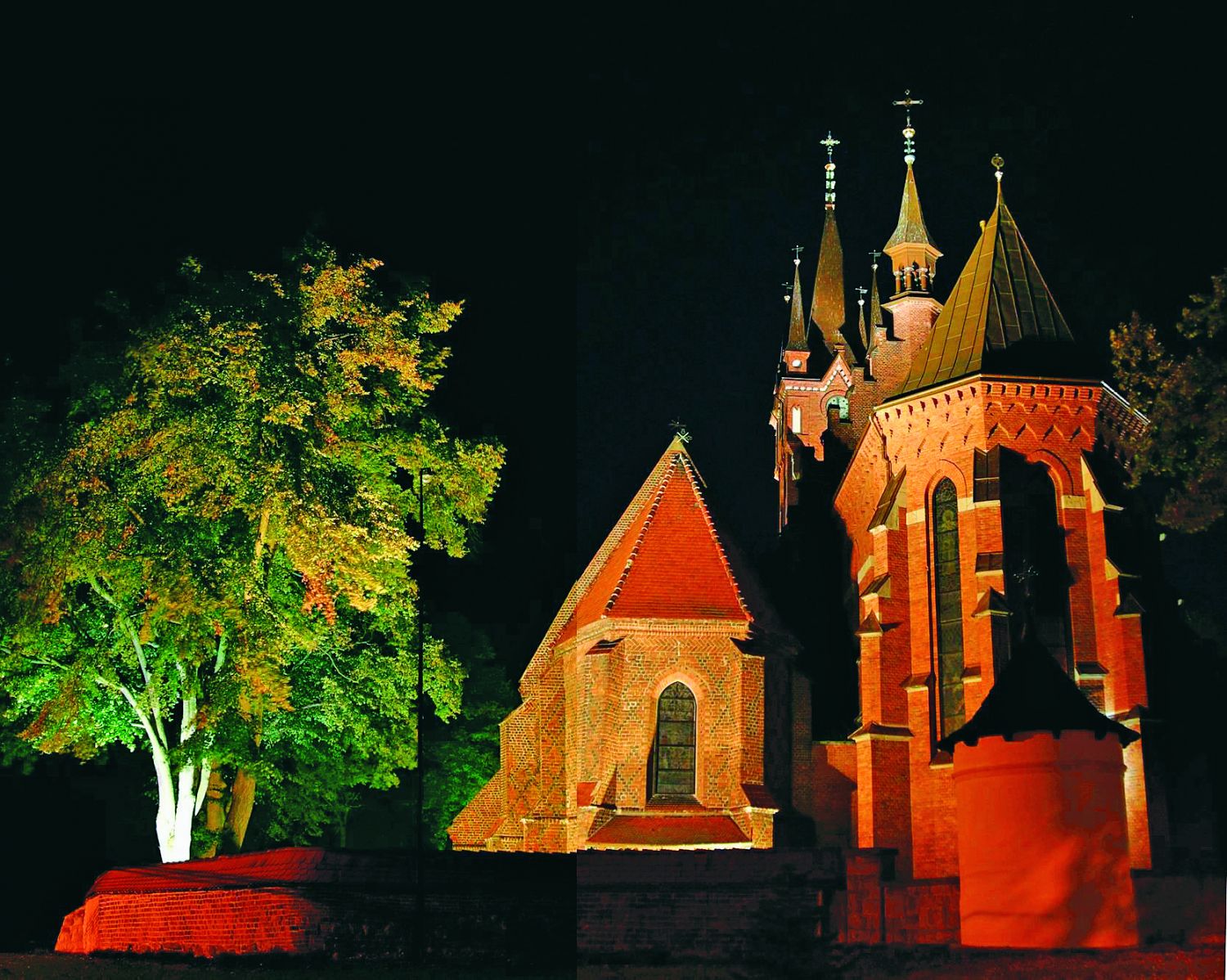 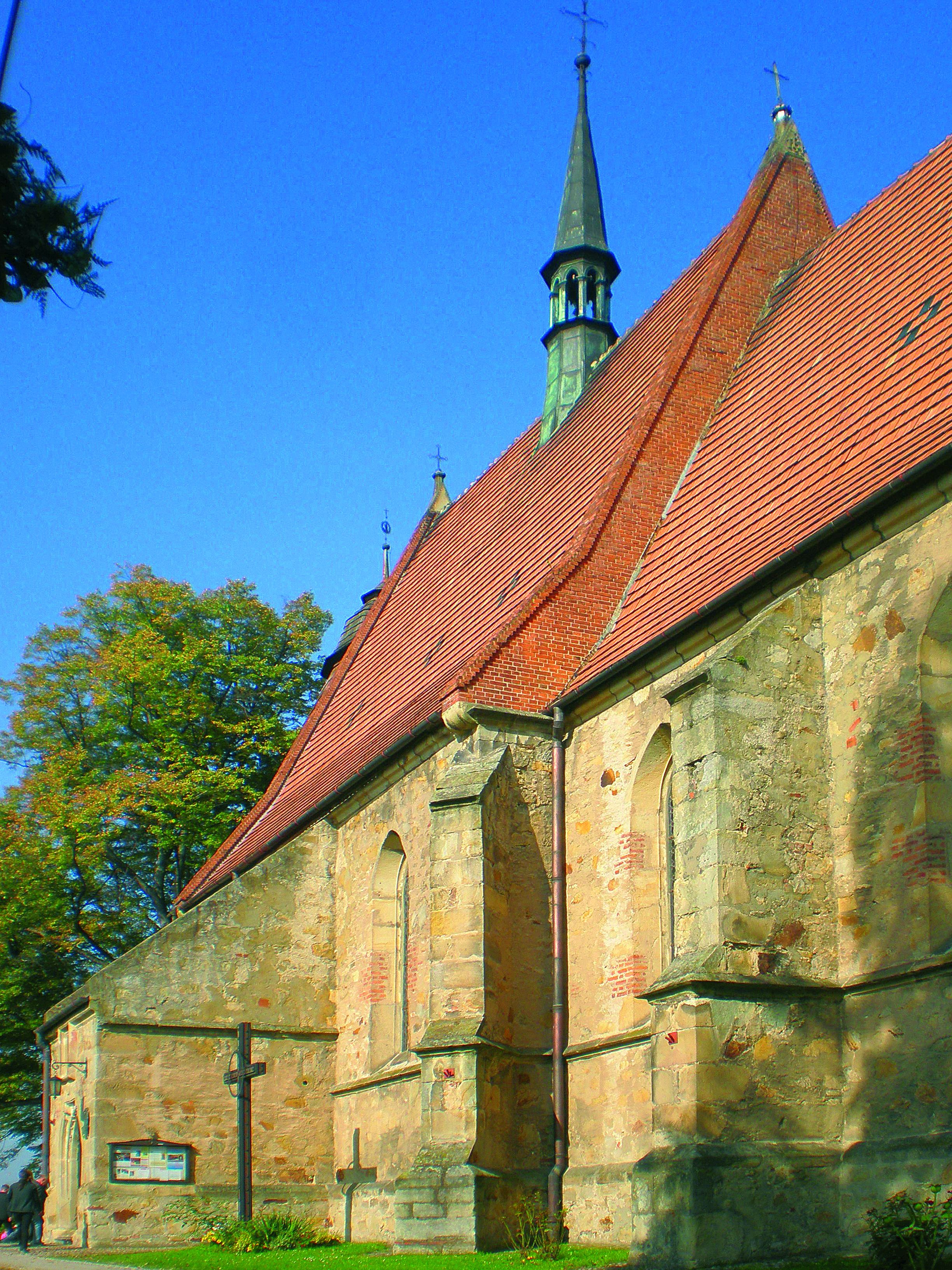 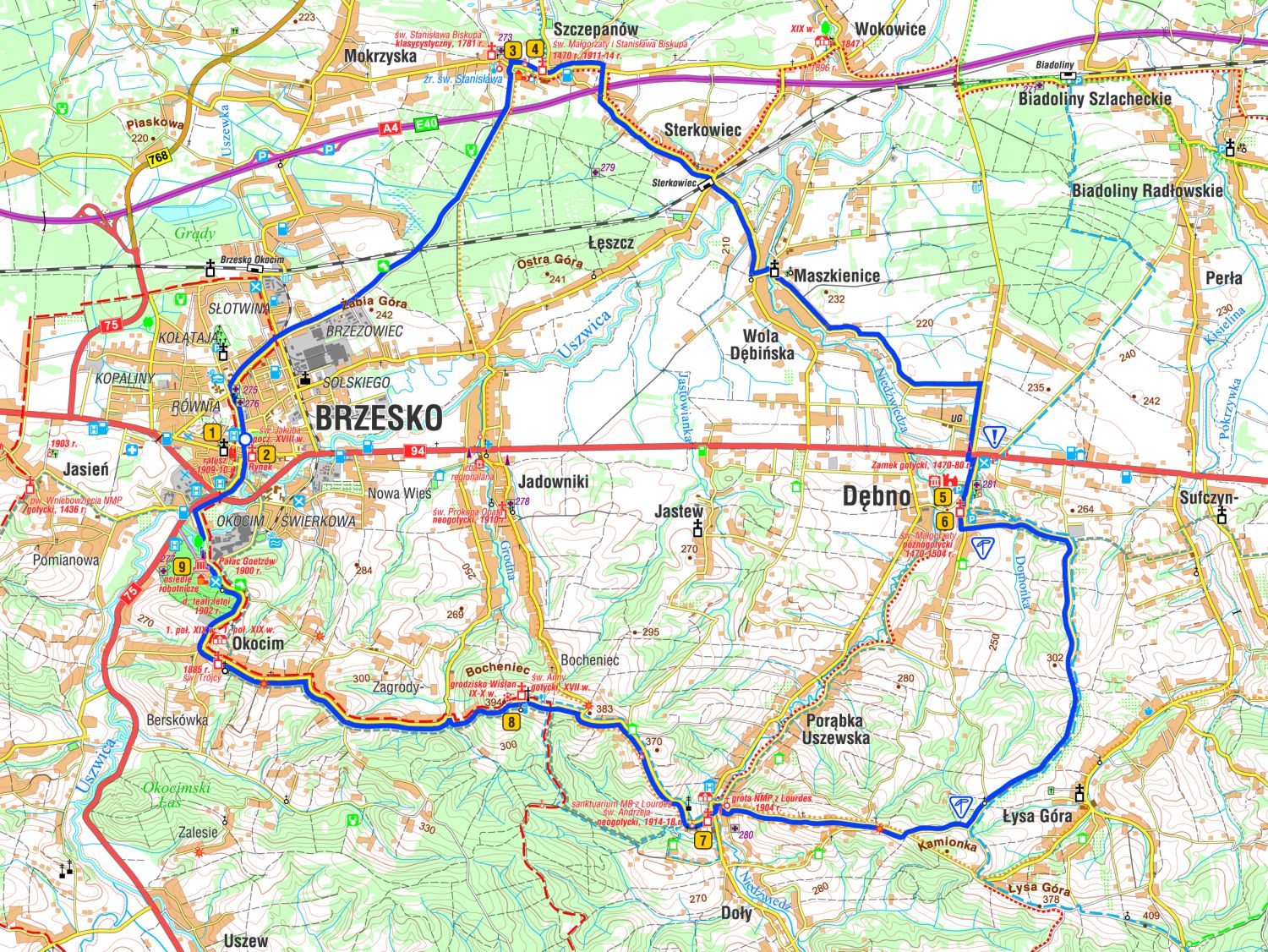