Route 24: Through the Island Beskids

Beskid Wyspowy is certainly not as popular among cyclists as Beskid Sądecki or Beskid Makowski, and yet here we can also find very attractive routes. We invite you to one of them. The trip starts from the market square in Tymbark. We head west along Armii Krajowej Street, with a historic church on the left. After the bridge on the Łososina River, at the junction we turn to the main road on the left. We ride along the railway tracks and in the village of Podłopień we turn right in front of the church. If we would like to bypass the first part of the route, which is a mountain loop, we should go straight ahead by a shortcut. In Wilkowisko, in front of the wooden church, we turn left, and climbs by the steep winding asphalt road to the top of the observation mountain (554 m a.s.l.) with the Millennium Cross. We go down the southern slope to the intersection, where we turn right. We then follow a basically flat road to an intersection, where we turn left following the black trail and after a short climb we descend to Dobra. In the centre of the village at the crossroads we turn right, pass a wooden church, and along the green trail we reach the national road No 28. We turn right and immediately turn left onto Jurków. After passing the church in Jurków, we turn left across the bridge and climb a long, arduous climb to Rydz Śmigły Pass, with a beautiful panorama both on east and west side. Following trails (red hiking, yellow bicycle) we descend into the valley of Czarna Rzeka. We turn left and descend to Słopnica along the stream. We head left, next to the church, then after the bridge we turn left again along the curve of the main road. After 2 km we reach the national road No 28, turn left again, and after passing the bridge on Słopniczanka we turn right onto a narrow asphalt road (Targowa Street). It shall lead us to the centre of Tymbark, where we turn right and reach the market square.

1. The church in Tymbark – built in 1824 in the so-called Emperor Joseph II style. Inside, neo-Baroque altars. In one of them the painting of St Anna Samotrzecia in a wooden dress from the second half of the 17th century.
2. Church in Wilkowisko – built in 1921-1930 on the model of the previous one, burned in 1916. Wooden, with a log structure, boarded. Partially Baroque interior, late Baroque altar from the 18th century, moved from the church in Limanowa.
3. Wooden church in Dobra – built in 1678 with a chapel added to the nave in 1760. Completely rebuilt in 1865–67. The walls, the barrel vault of the nave and the ceiling of the presbytery are decorated with late Baroque polychromy from 1760. The paintings of 12 apostles draw attention. In the altar of the chapel, a picture of the Scapular Virgin Mary and an interesting polychromy.
4. Wooden church in Jurków – erected in 1913 on a basilica layout (rarity in religious wooden buildings). The vaults and walls are decorated with contemporary interesting polychromy. In the altar of the right chapel, there is a painting of the face of Christ (i.e. Mandylion). Apparently, it is a faithful copy of an old icon that was brought here by Wallachian shepherds in the 15th century.
5. Wooden church in Słopnice – erected in 1774–76. Modest interior design, no polychromies. The most valuable piece of equipment is a large painting from 1637 painted on a board, placed in the late Renaissance main altar, depicting the Mother of God with the Child and St Nicolas. 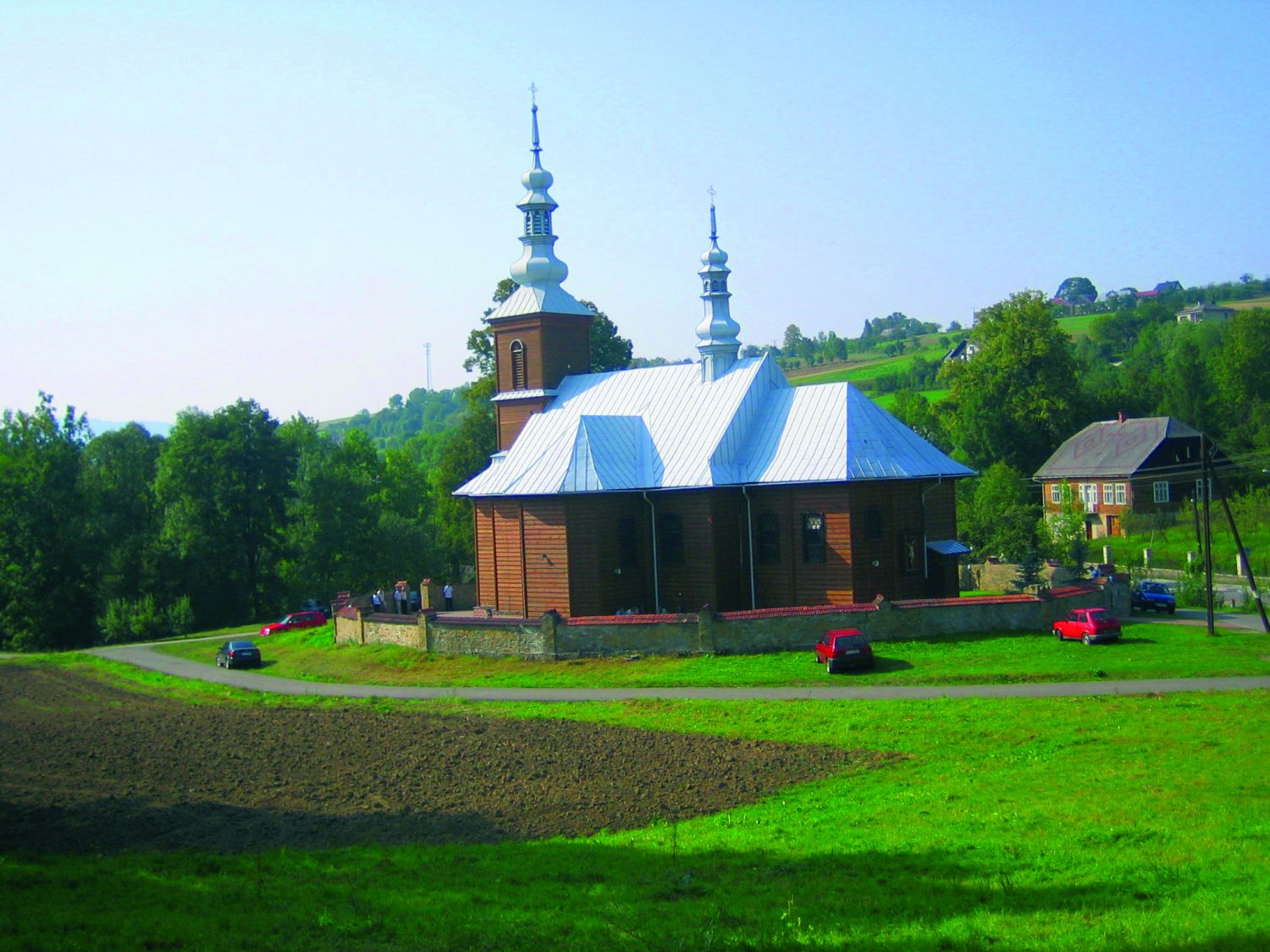 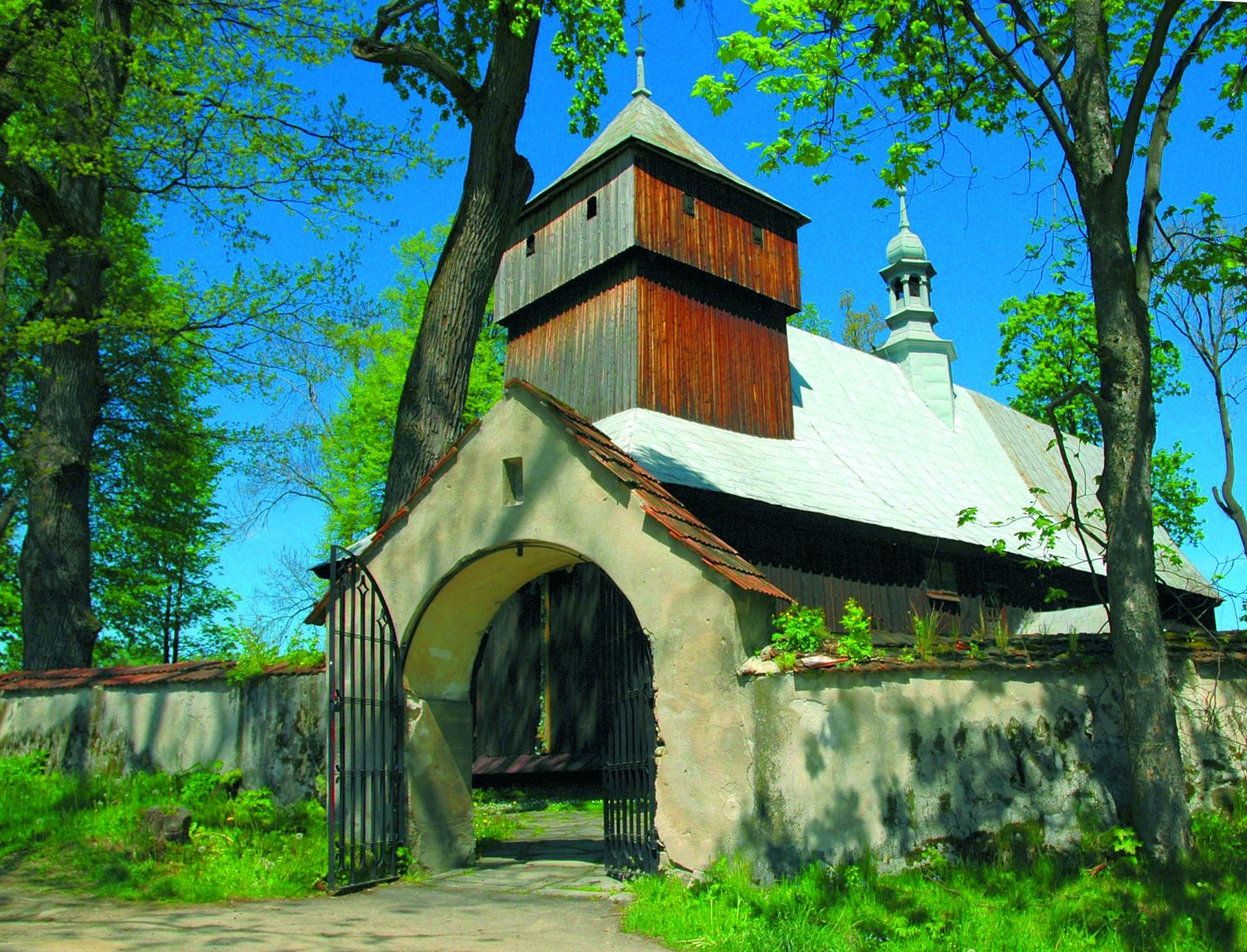 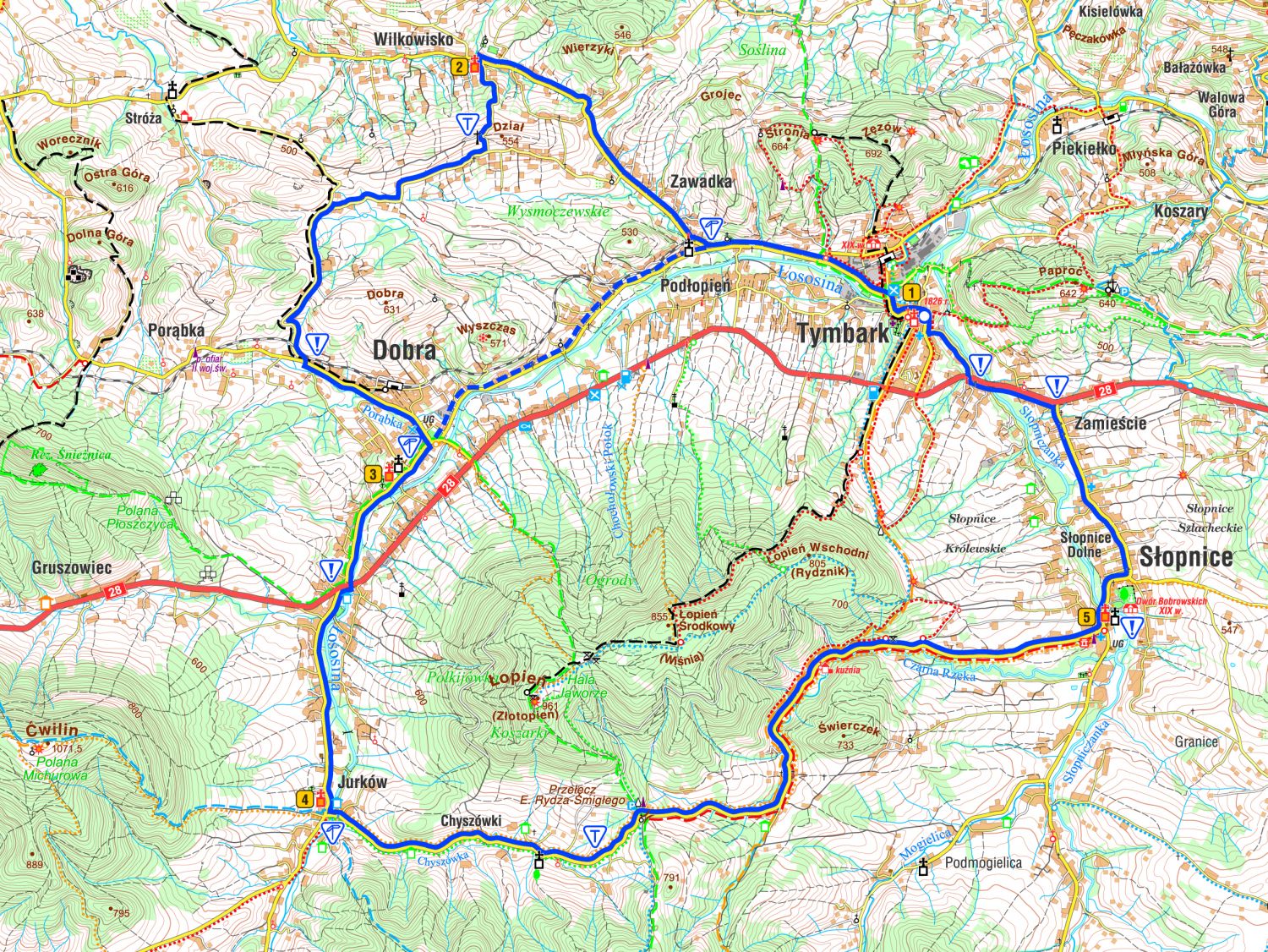