It is quite a difficult, but one of the most beautiful trips proposed in the Atlas. Wonderful panoramas of Lake Czorsztyn, Pieniny and Gorce varied with outstanding monuments will surely provide wonderful impressions. We start from the parking lot by the 14th-century castle in Niedzica, going west along the main road. We pass Falsztyn and after reaching Frydman we turn right from the main road to the centre of the village dominated by white walls of the Gothic church. We go through the centre of the village to the main road, turn right and after the bridge again right heading at Dębno, where we make obligatory top to visit the beautiful wooden church, inscribed on the UNESCO World Heritage List. We leave by road No 969, turn right and cycle about 4 km to the left on Maniowy. We go up the hill along the fence of the cemetery, where a wooden chapel is worth seeing. We turn left at the crossroads in the centre of the village, then right after the Commune Office. We go straight to Mizerna, turn left at the chapel, and after 400 m turn right after the church. At the crossroads we turn right and cycle past the school to reach road No 969. We turn right, then left after 300 m and head at Lake Czorsztyn. After the curve of the road, we turn right and enter the Czorsztyn Tourist Settlement. We cycle through the centre of Osada, then after the last buildings, we turn left and return to road No 969. We turn right and then once again right according to the signpost for Czorsztyn. After less than 2.5 km, we enter Czorsztyn, turn right by the chapel and descend 2.5 km to the picturesque ruins of Czorsztyn Castle. We return along the same road (we go straight at the chapel) and at the intersection we turn right to Niedzica. The last part of the route is a serpentine exit to the Sromowskie Lake shore, and then a sharp climb to the castle in Nidzica (the dam of the power plant is visible on the right).

1. Lake Czorsztyn – an artificial reservoir created in 1997 by partitioning the Dunajec with an earth and concrete dam. Water area picturesquely integrated into the surrounding, it plays a retention, energy and recreational role. An exhibition pavilion next to the dam.
2. Dunajec Castle in Niedzica – built in 1310 as a strengthening of the northern border of the Hungarian Kingdom. It consists of a Gothic upper castle and a lower castle expanded in the 15th and 16th century in the Renaissance style. The site is open to the public. Near the castle there is a wooden granary from the 19th century, which houses the Regional Museum of the Spisz Culture.
3. Church in Frydman – the oldest church in the Polish Sub-Tatra Region. It was built in the 14th century, the body of the temple in the Gothic style. On the walls of the presbytery a small window and a sculpture of the head in the Romanesque style, originating from the earlier temple. The interior of the 18th century in the style of Spisz rococo. An interesting chapel of Our Lady of Mount Carmel from the 18th century.
4. Wooden church in Dębno – an example of wooden, Gothic religious architecture of the Podhale Region. The site is inscribed on the UNESCO World Heritage List. Inside, on the walls and ceilings, valuable paintings and patron polychromy from the 15th and 16th century. In the main altar, a triptych from the 16th century, in the left side cabinet with Gothic sculptures from the beginning of the 15th century. It is also worth paying attention to the wooden, painted tabernacle and tower monstrance from the 15th century.
5. Larch cemetery chapel in Maniowy – moved in 1987-88 together with the cemetery from the bottom of the Czorsztyn Reservoir which was then under construction. Built in 1722 in a log construction and covered with a uniform shingle roof, it was located in the rural cemetery by the Dunajec River.
6. Czorsztyn Tourist Settlement – an unusual open-air museum created in the 1990s, when selected objects of folk and health resort construction were moved from the areas designated for the construction of the dam on the Dunajec.
7. The ruins of the castle in Czorsztyn – a stronghold guarding the Polish-Hungarian border in the Middle Ages. The Baranowski Tower from the 17th century has been preserved to this day. Inside, a museum exhibition has been organized. 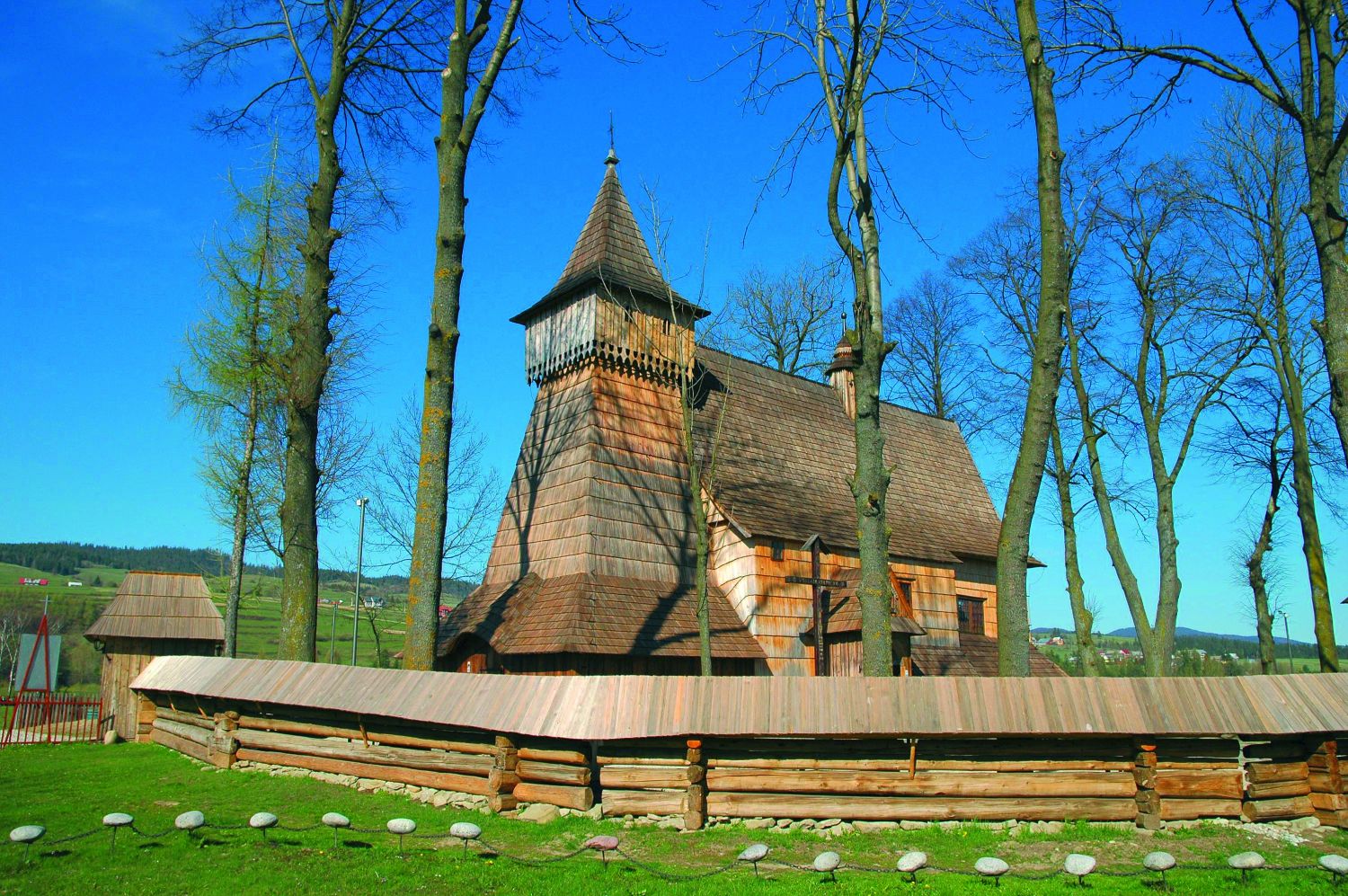 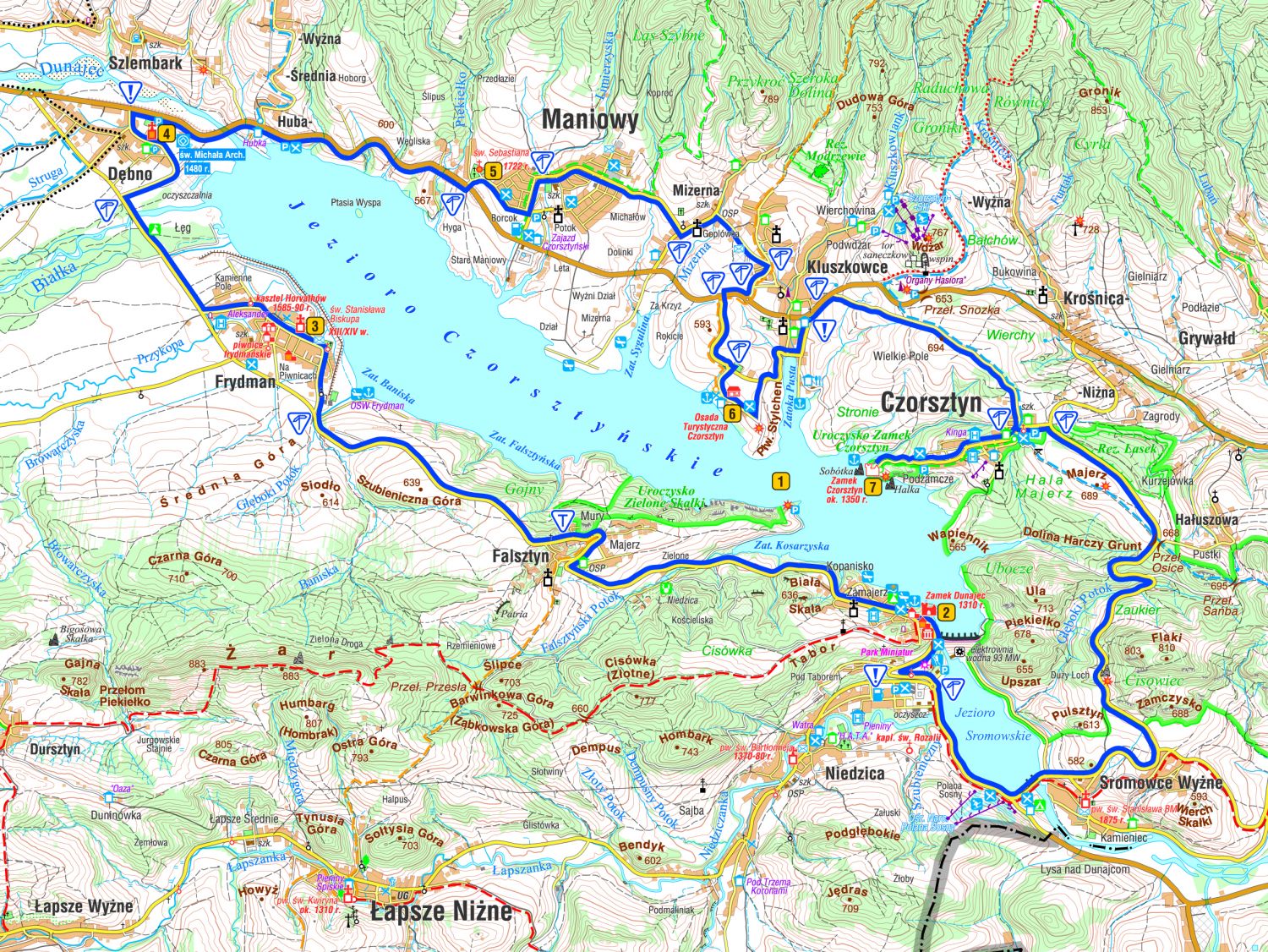