Route 32: Ciężkowice – easier than you think

During this trip, the Ciężkowice-Rożnów Landscape Park will offer us its natural beauties and monuments. We will go mainly on asphalt and dirt roads, and there will not be many climbs, so the trip is rather easy. We start at the market square in Ciężkowice, admiring the historic buildings and the Natural History Museum. We cycle along  Św. Andrzeja Street next to the church and descend to road No 977. We turn left and then right onto the bridge on Biała. We cross the railway tracks and head left to Kąśna Dolna. Following the curve of the road, we turn left to visit the manor of I.J. Paderewski. We return to the main road, and after 700 m we turn right. To shorten the route, we can also go straight ahead. We cycle up steeply, turn left at the wooden shed and enter the forest. Already on the ridge, we turn left to the green bike trail and the red hiking one. We go to the intersection, at which we turn left, and then follow the green trail straight ahead. In Budzyń, we turn left onto the ridge road and turn left after 900 m. We descend to Jastrzębia and turn left. We pass a wooden church and then a regional chamber (for description – see Route 31). In Kąśna Górna, we turn right into the side asphalt road and climb to a small ridge. We turn right on the asphalt road, then left at the junction. Half a kilometre further we turn left again. We join the green trail that leads left to the interesting rock known as the "Devil's Playground". We descend to Zborowice. We turn left and after a while turn right onto road No 977. Behind the church in Zborowice, we turn left and cycle almost 4 km through the valley. In the hamlet of Zalesie we turn sharply left uphill and at the junction we turn left again. Having passed the military cemetery No 118, we turn left to Staszkówka. Next to the church we head left again to Ciężkowice. We go 5.5 km straight and near the Skała Hill, we can turn to Stone City Reserve. Tysiąclecia Street will lead us to the market square in Ciężkowice.

1. Historic buildings in Ciężkowice – characterized by wooden and brick houses from the 18th–19th century, located around the Market Square and along the streets departing from it. These buildings are distinguished by arcades protruding in front of the facades supported by decorated wooden columns.
2. Natural History Museum in Ciężkowice – a private, substantial collection of insects, birds and other animals from the forests of the Podkarpacie Region. We can also admire hunting trophies and the original bat cave.
3. The church in Ciężkowice – built in the neo-Gothic style in 1903 according to the design of the architect engineer Jan Sas-Zubrzycki.
4. Ignacy Paderewski's Manor in Kąśna Dolna – a classicistic manor house surrounded by a large English park, built at the beginning of the 19th century. In the years 1897-1903 it belonged to the world-famous composer Ignacy Paderewski. Currently, the manor houses a small museum dedicated to the great pianist and classical music concerts are organized there.
5. "Devil's Playground" Rock – a gate-shaped rock made of sandstone, considered a natural monument.
6. The church in Zborowice – late Gothic temple, built in the years 1530-41. Renovated many times, including at the beginning of the 19th century, when the upper floor of the tower was added.
7. The "Stone City" Nature Reserve – created in 1931 to protect a picturesque group of sandstone and conglomerate rocks. Many of them are shaped like human and animal figures, which is reflected by the names of the rocks, such as: Witch, Town Hall, Grunwald, Badger, Mushroom, Gypsy, Tower. Near the reserve there is a waterfall with a height of about 10 m., one of the largest in the Polish Carpathians. 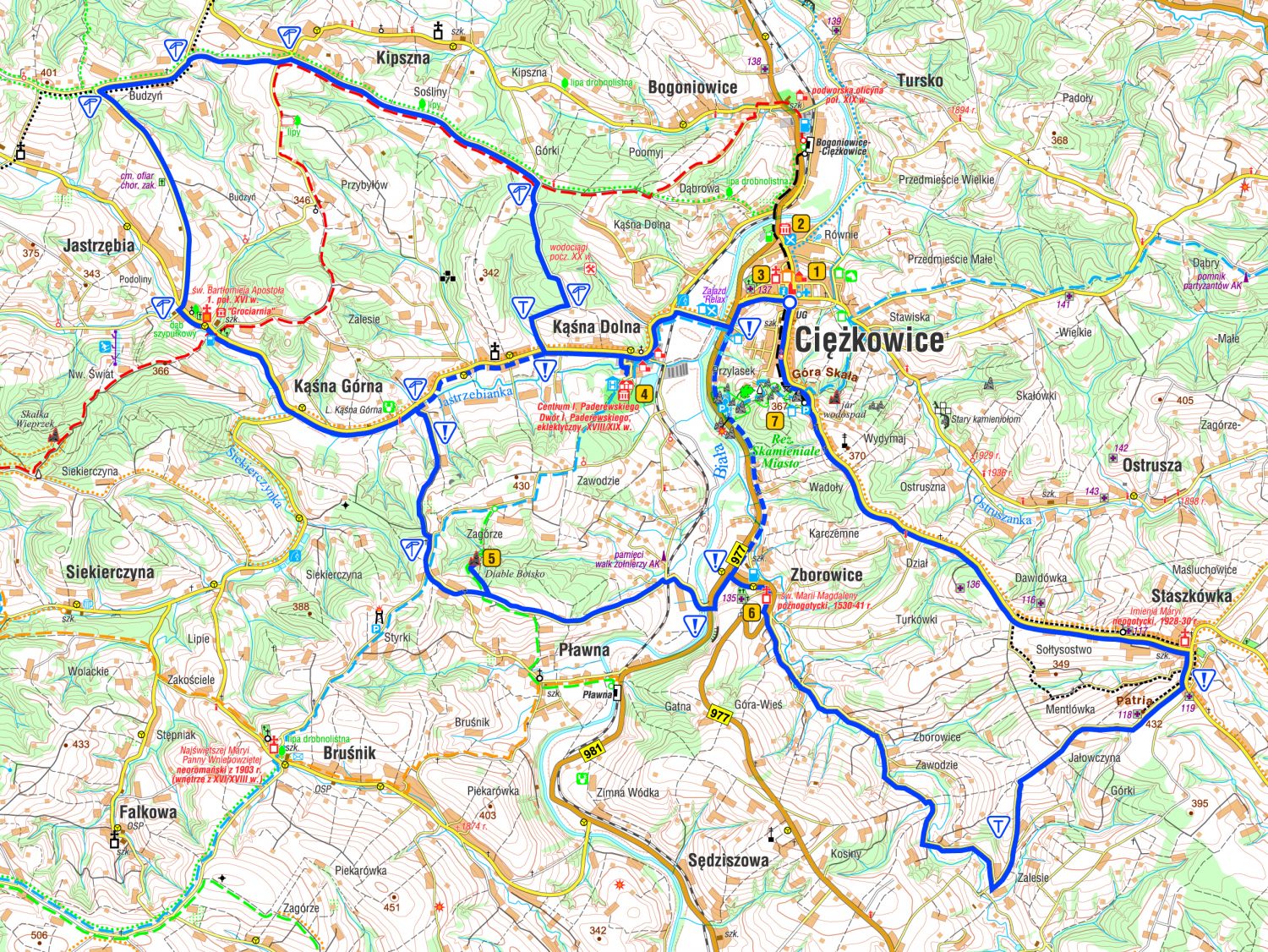