The route of this trip abounds in historic sacred and palace–manor buildings. The picturesque valley of the river Dłubnia and the shady Ostrysznia Gorge offers a moment of rest from civilization. Numerous rocks along the way will not let us forget that we are moving around the Kraków-Częstochowa Upland. We leave the market square in Skała by Słomnicka Street heading to Nowa Wieś. Having reached the signpost to Minoga, we turn left. Next to the church we go down to the centre of the village and head left to the manor of the Wężyk family. From Minoga we take the main road to the right up the hill. Further on, we go by the upper area through Barbarka to descend to Gołszyn by forest gravel road. However, we do not go down to the centre of the village, but we take the side asphalt road and head to Wysocice instead. Below the church in Wysocice we go left, following the blue bike trail. In the centre of Ściborzyce, we can visit the Popiel Palace, and a little further – the monastery in Imbramowice. To reach Glanów we have a choice of two variants: the first, easier, by the road, or the second, much more difficult, by the Ostryszni Gorge following the black trail. We can also shorten the route by turning left. Next to the manor complex in Glanów, there is a blue hiking trail that will take us through the picturesque valley of the river Dłubnia. We cross the river, reach the asphalt road and head to the right (a church should be visible on the left). We cross the bridge, then the intersection and ride up the hill to the south. We shall see the blue trail again near the forester's lodge. In Tarnawa, we pass by the church and the 18th-century manor and, after about 1200 m, we enter the Dębowiec Forest Reserve. Staying on the blue trail, we leave the road to the right along a paved road. At the edge of the forest, we turn left and follow the dirt path to the provincial road, by which we return to Skała. The trip ends on the market square. We can still visit the church and the historic wooden belfry, located next to the market (slightly west).

1. The church in Minoga – built in 1736 in the Baroque style. It is distinguished by original concave facade, extended by two towers.
2. Wężyk family Palace in Minoga – built in 1859 in the neo-Renaissance style by Teofil, son of Franciszek Wężyk – a well-known writer and political activist.
3. Church and Sanctuary of Our Lady of Wysocice – a valuable monument of Roman architecture. Built at the turn of the 12th and 13th century, it has been preserved practically without major changes to modern times. Noteworthy is the sculpture of the Madonna with Child on a Throne in the top of the presbytery, arcade window openings of the tower, as well as a portal with a tympanum decorating the entrance from the porch to the church. In the main altar, there is a painting of the Mother of God from the mid-17th century, a replica of the picture of the Black Madonna of Częstochowa.
4. Palace in Ściborzyce – the former palace of Popiel family from the late 19th century. Below, above the Dłubnia River, there is the "Jordan" source (a natural monument), forming a small pond filled with greenish, bubbling water.
5. Norbertine Monastery in Imbramowice – the current Baroque complex of the Norbertine Monastery and church was built in the years 1711–21. Inside, there are some interesting Baroque illusionist painting on the walls of the nave.
6. Ostryszni Gorge – extremely picturesque with numerous rock forms, xerothermic and riparian vegetation.
7. Manor in Glanów – a manor complex, consisting of: a classicistic manor from 1786, farm buildings from the 19th century, a coach house, two barns, a granary as well as a residential and utility building. The facility is not open to tourists.
8. Dłubnia Valley – a group of magnificent rocks located on the left bank of Dłubnia River between Glanów and Imbramowice.
9. Wooden belfry in Skała – this pillar structure located on the Wooden Architecture Trail was erected next to the church of St Nicholas in 1765. 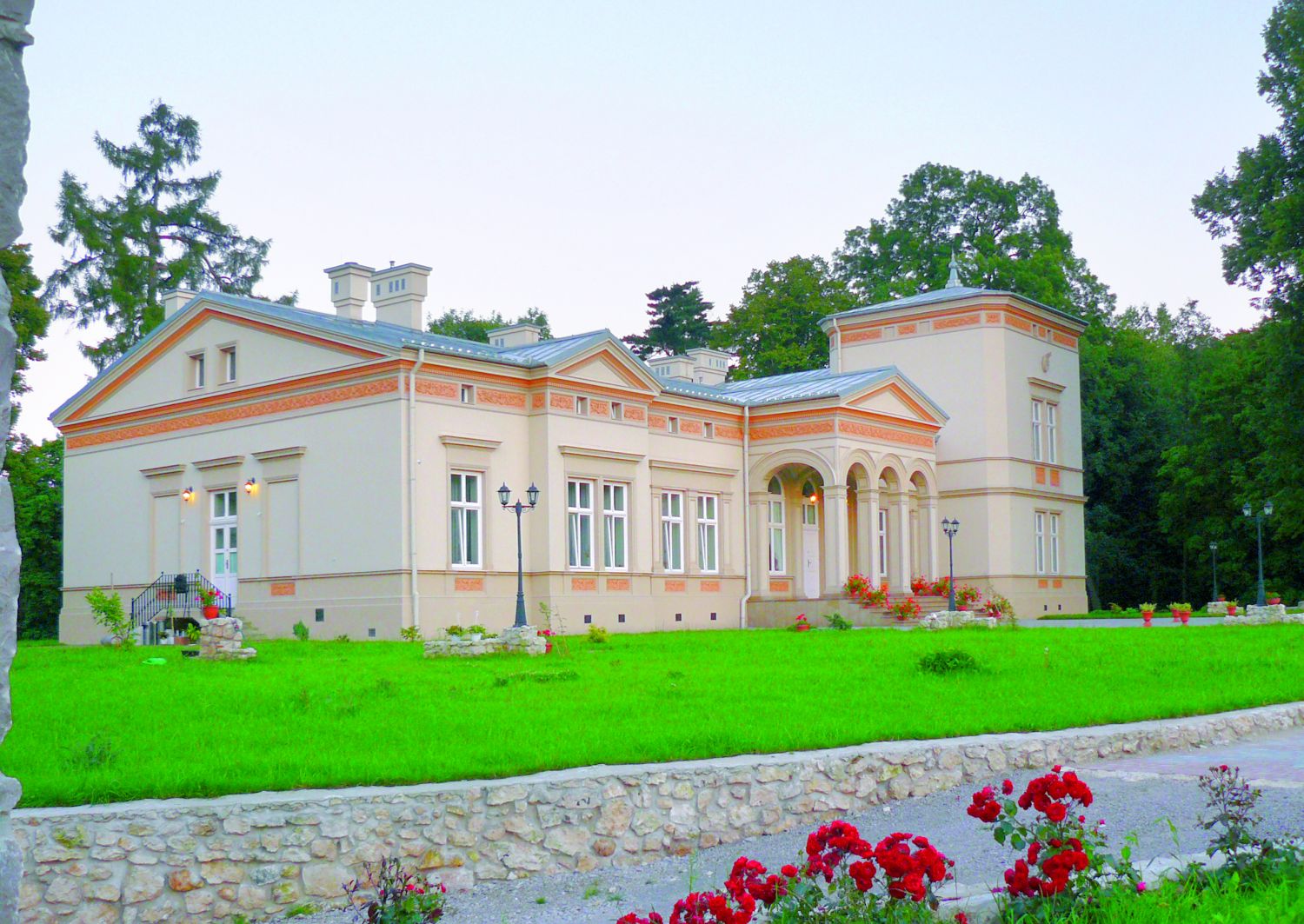 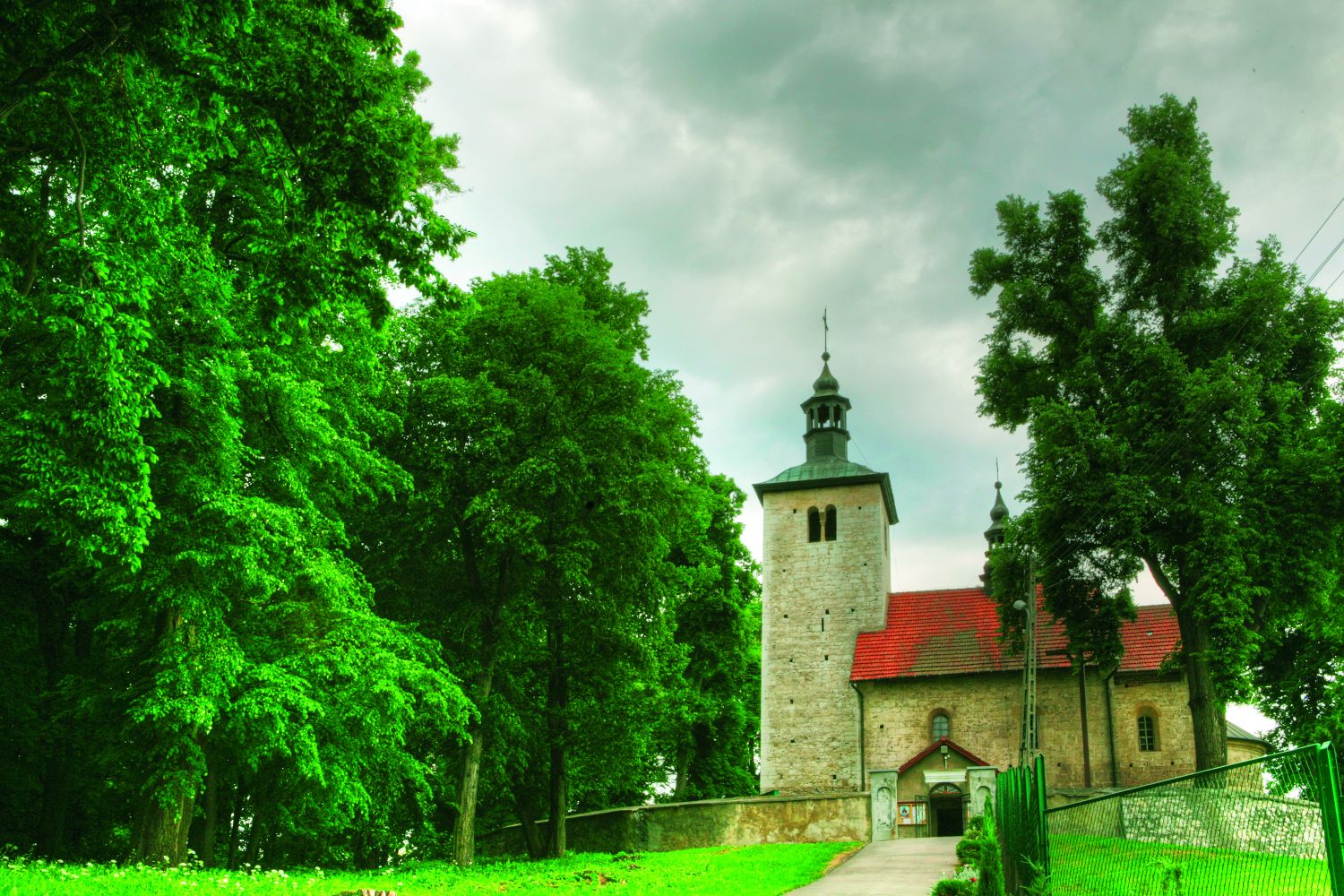 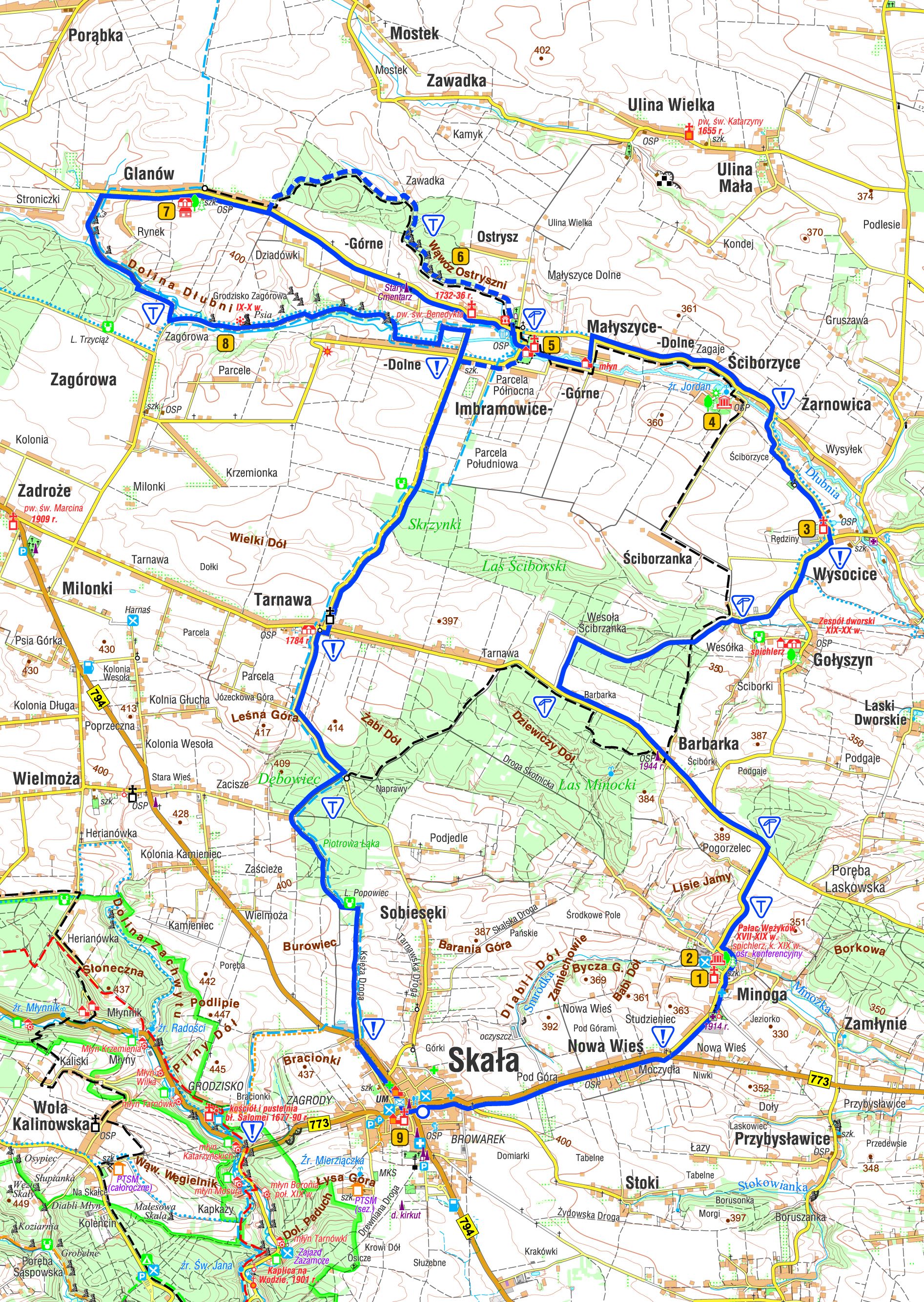