Route 16: To the Bronaczowa Forest

Easy route, with just a few climbs, leading by roads with good surface. The trip begins at the market square in Skawina, from which we go east along Słowackiego Street. We pass the church, then the intersection with Popiełuszki Street and go straight ahead along Korabnicka Street. After 300 m we turn into Kopernika Street, then Wyspiańskiego Street, which brings us to Chorowice. In Chorowice, we pass a chapel on the left, and a little further the remains of the manor complex. At the intersection with the Mogilany-Skawina road, a beautiful panorama appears on the Carpathian Foothills range and the Beskids. We turn left and soon we reach the centre of Mogilany. We pass the church, turn right on the little market square to see the Konopka family manor complex. We return to the centre, from where the green bike trail, running along Mogilańska Street, leaves the village. In a place of a clear step we turn left with a sharp curve and follow the gravel road down the south. After a short climb, we turn right on the ridge and enter the forest. At the bifurcation with a roadside cross we follow the trails turning to left, and a little further at the intersection – to the right. On the curve of the road we pass a shed and cycle along the red trail that leads to the right to the Kozie Kąty Reserve. Still following the green trails, we reach the buildings of Podlesie. We turn left by the shop (by going right, we can shorten the route), pass the Children's Rehabilitation Hospital, and turn right at the intersection, to follow the red bike trail, then we turn left 1 km further. We are now heading Ostra Góra from which we shall descend to Wola Radziszowska. We turn left, pass a stream and take a winding road to the intersection. We turn right to see the centre of Wola Radziszowska and a wooden church. Following to the amber bike trail, we cross the railway track twice and along the buildings of Radziszów (in the centre, there is a historic church and the renovated manor house) we cycle towards Skawina.

1. The parish church in Skawina was built in the time of King Casimir the Great, but frequent fires caused the temple to lose its original form. Its current shape dates back to the reconstruction in 1826. In the presbytery, there are two valuable, unusual 19th-century paintings: "Waking up of the shepherds" and "Catching a fish with golden gills".
2. The building of the "Sokół" Gymnastic Society in Skawina – dating back to 1906, standing on the site of a fortified castle built by King Casimir the Great.
3. Town hall in Skawina from the beginning of the 20th century. Currently, the City and Commune Office.
4. The filial church in Skawina probably comes from the 17th and 18th century, it served as a temple at the hospital-shelter founded by the Benedictines from Tyniec.
5. Manor complex in Chorowice – a building consisting of a manor house, a neo-Gothic chapel from the beginning of the 20th century, quarters for the laborers, a stable and a park. The manor was built in 1905, then rebuilt after 1945 and in 1985. It belonged to the Raczyński, Deras, and Doboszyński families. Currently it houses a school. The chapel dates from 1915.
6. The church in Mogilany – dates from 1604. Slightly expanded in the 19th and 20th century, and in the first half of the 19th century surrounded by a wall with a belfry. Temple equipment is mainly Baroque.
7. Manor in Mogilany – built at the end of the 18th century on the site of a former palace. It was here, that Mikołaj Rej, hosted in 1567, wrote his poem "Mirror" and the third book of "Life of a good man".
8. Bronaczowa Forest and the Kozie Kąty Reserve – a forest complex covering a dense beech and fir stand with an elongated hill cut through by picturesque valleys. Part of the forest is occupied by the Kozie Kąty Forest Nature Reserve.
9. Wooden church in Wola Radziszowska – built at the end of the 15th century. Inside, it is worth paying attention to the Gothic ogival portals and the decor from the 17th-19th century.
10. The church in Radziszów – erected in the 15th century, rebuilt after the fire in 1841. Baroque equipment has been partially preserved. 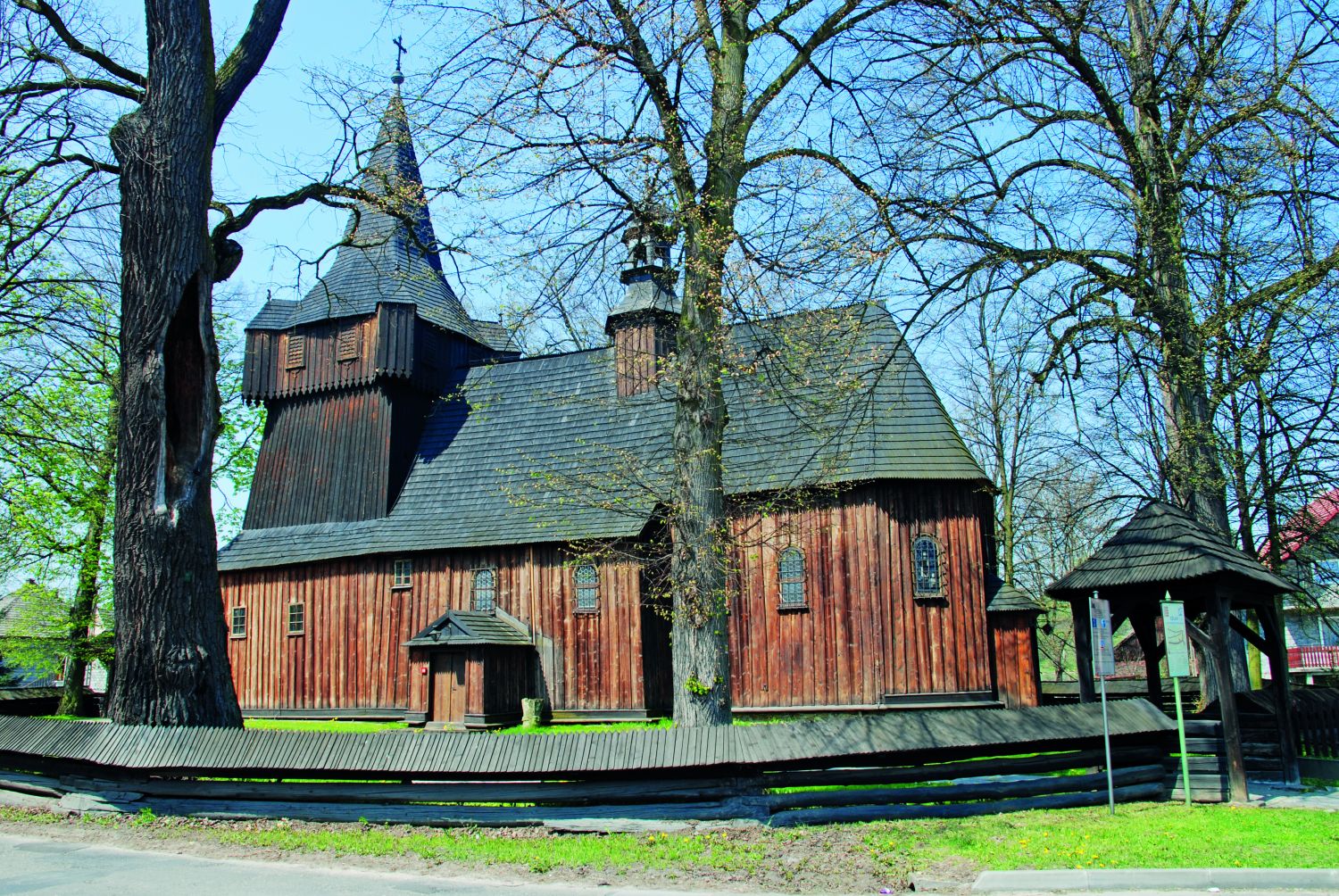 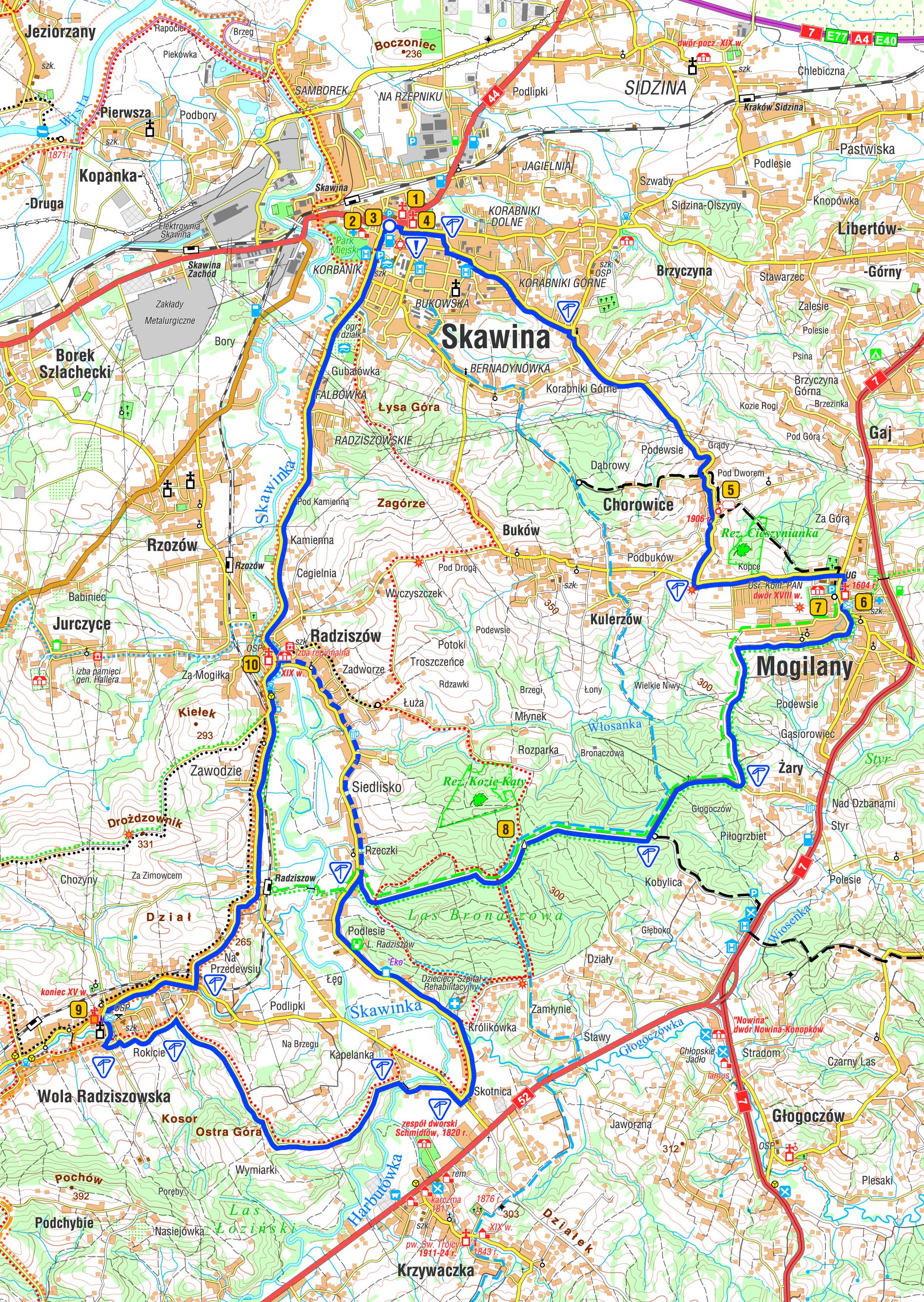